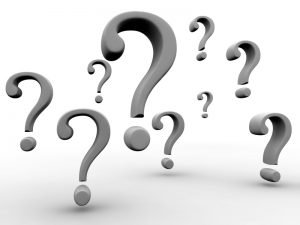 When God asks a person a question He is not looking for information. After all, He is omniscient – all knowing. He is not asking a question so that we can inform Him of something that He does not know or happens to be unaware of. He asks us questions so that we, in the process of answering, will discover something that we need to know.

There is a story in the book of Genesis about Jacob and Esau. They are brothers. Esau is the older of the two. Apparently he is more interested in food than he is in his birthright as the oldest. So, he “sells” his birthright to his younger brother. Later on Jacob deceives his father and receives the blessing that rightfully only belongs to the firstborn – Esau.

Jacob, as a name, means “holder of the heel” or “supplanter”, because he twice deprived his brother of his rights as the firstborn son. Other meanings of his name include: trickster and con artist.

Jacob really did not know who he was. It seems that he was always trying to be someone he was not – his older brother, the right man for his uncle’s daughter in marriage, a wealthy man with herds and family. He never seems content with who he is or what he has. He is always striving for more, strutting to be noticed, and struggling to live life in some meaningful way. He did not accept the fact that he was ‘second born’ and yet still loved by his parents and by the God that he and his family worshipped.

Then, one day, Jacob encounters the God that he and his family believed in. In Genesis, chapter 32, he wrestles with God all night. During the struggle he comes to his senses and realizes who he really is and the nature of his character as exhibited all through his life. God asks him a question: “What is your name?” (Verse 27). God was asking Jacob – do you know who you really are? In Hebrew culture, your named defined you. And, Jacob had always strived to be someone he wasn’t and to have what really did not belong to him.

So, God asks him, “Who are you?” God knew – it was Jacob who didn’t have a clue. And, as soon as Jacob answered the question and admitted that he was simply Jacob – a thief, supplanter, con artist … immediately, God changed his name to Israel. A new name that would bring about a new character, a new understanding, a new future as he walked into his divine destiny and became who God created him to be in the first place.

So, today, maybe God is asking you: “Why are you?” Not who have you become as a result of the pressures of life, the expectations of others (including other Christians and the Church), or what you do for a living. Who are you? When you take away all the external trappings what is left – who is left?

This is what Jacob needed to discover. This is what each and every true follower of Jesus is invited to discover. And, in this discovery there is freedom, joy, purpose, and fulfillment. And, only after discovering this can you then move into God’s plan and purpose for your life.

I Am Amazed… It Is Not About You!
Scroll to top