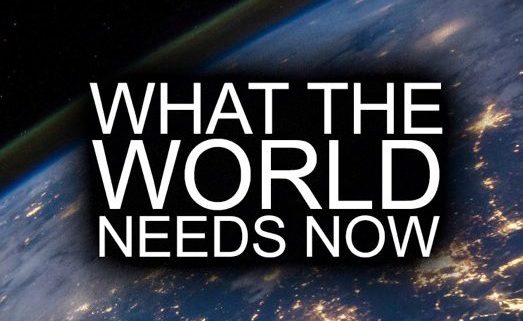 We are called to share Jesus and the Gospel of the Kingdom with others at all times. Actions and words. Oftentimes the best way to open the door for sharing Jesus with someone is to begin a civil conversation. This means we maintain a sincere, kind, and respectful tone as we dialogue. It also means praying for the Holy Spirit’s guidance about what to say, including when and how to say it.

As Christians, many of us tend to fall into two different extremes. There are some who don’t engage with non-believers at all about spiritual matters because they feel afraid, intimidated, or ill-equipped. There are others who do, but it can be in a manner that is obnoxious or argumentative. Let’s look at 1 Peter 3:15 as the remedy to both extremes. It says:

“But in your hearts revere Christ as Lord. Always be prepared to give an answer to everyone who asks you to give the reason for the hope that you have. But do this with gentleness and respect.”

Our effectiveness for the Gospel begins with a reverence for Christ as Lord in our hearts. We are called to always be ready to give an answer to those who ask us the reason why we have hope. We are to do this with gentleness and respect.

What the world needs now, more than ever before, is for believers to be open, engaging, and available to civil conversations in a culture where people are becoming more and more hostile to Christianity – and to each other. Just look at any comments section of a social media post or news article. It can be the simplest topic to the most controversial. Doesn’t matter. In just about every instance you will have people who disagree with one another and begin labeling and attacking with no filter. Civil discourse seems to have left the building. And we Christians are just as guilty of this as nonbelievers.

The truth is, we are not going to win anyone or convince anyone of anything with our harsh and obnoxious Facebook posts over petty differences. We are not going to argue anyone into God’s Kingdom. Instead, let’s begin in civil dialogue.

Jesus preached and taught people, but in His one-on-one conversations we see that He would often take on a different approach by conversing and asking questions. One of the best examples of this is recorded in the 3rd chapter of John. A man named Nicodemus had an encounter with Jesus – and his life changed forever. And, in John, chapter four, Jesus engages in a conversation with a woman at the well and that one conversations leads to a whole village hearing the Gospel of the Kingdom.

Let’s look at Jesus’ conversation with Nicodemus next time…

Nick At Night – Part One
Scroll to top