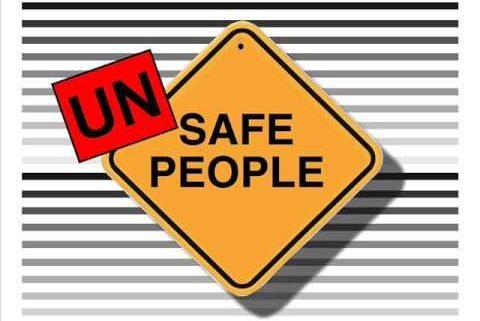 We are looking at characteristics of people who are really not safe to build relationships with. Last time we saw:

When a person that you relate to has something that needs to be addressed, and you need to confront him or her, if they refuse to take your criticism and input resulting in actual change this is a key warning sign that you are dealing with an unsafe person. If instead of responding correctly and discussing the issue, they become defensive, start making excuses, and often attack you thus turning the spotlight off of themselves and putting it on you – then you are definitely dealing with an unsafe person.

A safe person would respond correctly, receiving the input and wanting to change to improve their relational skills. They would be more interested in doing what was right than appearing ‘right’ in heir own eyes.

This is one of the marks of a truly safe person: they are confrontable. Every relationship has problems, because every person has problems, and the place that our problems appear most glaringly is in our close relationships. The key is whether or not we can hear from others when we are wrong, and accept their feedback without getting defensive.

The Bible is clear about the need to be able to hear rebuke from others (Matthew 18:15). Confrontation helps us learn about ourselves and change destructive patterns in our lives.

All close relationships hurt, because no perfect people live on the earth. But the safe people are the wise ones that can hear their sin and respond to our hurt. In short, they can “own” where they are wrong. If, however, someone has the character trait of defensiveness, when we need to confront him, we are going to be struck with all the hurt that his natural imperfections cause in the relationship. Someone who does not own his own need to change does not change, and the hurt is likely to continue.

The Pharisees of Jesus’ time were notorious for taking pride in their own righteousness. In fact, Jesus told a parable that poked fun of their attitude:

Luke 18:10-14 ““Two men went up into the temple to pray, one a Pharisee and the other a tax collector. The Pharisee, standing by himself, prayed thus: ‘God, I thank you that I am not like other men, extortioners, unjust, adulterers, or even like this tax collector. I fast twice a week; I give tithes of all that I get.’ But the tax collector, standing far off, would not even lift up his eyes to heaven, but beat his breast, saying, ‘God, be merciful to me, a sinner!’ I tell you, this man went down to his house justified, rather than the other. For everyone who exalts himself will be humbled, but the one who humbles himself will be exalted.”

The tax collector did not see himself as righteous. Instead, he sought grace humbly, for he knew that only through God’s grace could he be loved and accepted. The Pharisee, however, saw himself as good, and others as bad. He believed – wrongly – that all ‘badness’ was outside of himself.

Unsafe people will never identify with others as fellow sinners and strugglers, because they see themselves as somehow “above all of that.” This “I’m better than you” dynamic produces a lot of shame and guilt in people who are associated with this type of unsafe person. It significantly blocks intimacy because the two people are never on ‘even ground,’ which is where human intimacy takes place. It sets up comparisons, competitive strivings, defensiveness, and alienation.

Psychologists call this dynamic a “not me” experience: People have a character structure that does not allow them to see certain realities as part of themselves. They project things onto others and cannot own their own flaws. Unfortunately, many Christians have this mentality about sin in general. They will talk about the people ‘in the world,’ as if they are somehow not able to identify with them.