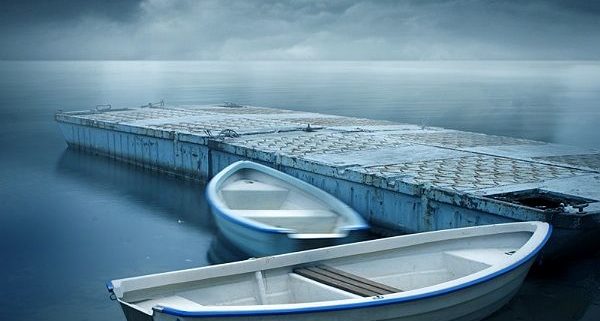 The disciples were following Jesus wherever He went, assisting Him in all His ministries. They were listening to His Word and helping Him preach and share the Gospel of the Kingdom, yet they found themselves being tossed up and down by a storm and in real danger of drowning. The disciples were learning a difficult lesson – one every believer must learn: we can find ourselves in the middle of God’s perfect will and in the middle of a perfect storm at the same time!

When author Gary Thomas and his wife considered buying a house, they prayed diligently for God to guide them. If it wasn’t His will, they figured He would close the windows of opportunity.

The window did not close, so they proceeded with their purchase. Five years passed, during which they enjoyed their home and the blessing of God. Then the economy entered a tailspin, and the house was suddenly worth less than they had paid for it. They wondered why God hadn’t stopped them from making a bad investment. They had prayed. They had listened. They had not heard “no.”

As Gary’s wife was seeking God one day, she heard His answer: Have you considered the possibility that I wanted you in that neighbourhood to minister rather than to bolster your financial equity? That insight caused them to rethink their questions about God’s guidance. They realized it was all about lives touched for Christ rather than value earned from holdings. Now the question was, did they trust God enough to follow Him down a path with no financial profit, but with great spiritual profit?

Christ doesn’t ask us to take up our portfolios and follow Him; He says to take up our crosses. Comfort is not a factor. But He does promise that the way to grow into the image of Christ is by trusting and obeying in all circumstances.

As in the case of Gary and his wife, the will of God is not always crystal clear. But on that day by the Sea of Galilee, God’s will couldn’t have been clearer to the disciples: Jesus had said, “Let’s go!” They didn’t call a meeting to deliberate; they didn’t pray; they didn’t seek counsel from others. God’s will has been right there in front of them, so without hesitation, they got into the boat. And now the thing that loomed right in front of them was death.

This unexpected peril was something new for the disciples. So far, following Jesus hadn’t been overly costly – little more than quitting their jobs and getting a bit of carping and criticism from local religious leaders (Mark 3:22). But they had faced nothing life threatening. In fact, it had been just the opposite: they were close associates of the most popular person in Galilee. They’s been welcomed in small towns as heroes. This movement of God was working; and all systems were go.

Then came the perfect storm. It certainly raised some questions.

Many people believe faith is some kind of insurance against high blood pressure and heartache. Trust God and you’ll have no worries. But a great paradox of Christianity is that trusting Christ does not keep the storms away. In fact, sometimes it pushes us into deep and turbulent waters.

Jesus faced a perfect storm when He rode into Jerusalem on the back of a donkey. He knew what He was about to face – unthinkable torture and death – and He dreaded it. In the garden He cried out, “O My Father, if it is possible, let this cup pass from Me; nevertheless, not as I will, but as You will” (Matthew 26:39). He was fully aware of the storm He was heading into.

The disciples in their tossing boat weren’t cognizant of these underlying spiritual issues. Fear gripped them, pushing aside all concerns about being in the will of God. But they were about to learn a priceless lesson: there is security is the heart of God’s will. Storms are not punishment for lack of obedience; oftentimes they are the result of obedience! Those men were in that storm because they had jumped in the boat when Jesus said, “Let’s Go!”

You will follow Jesus in a storm someday. And you will learn that, although it may be overwhelming, it’s the safest of all places to be.

A Friend Of Sinners
Scroll to top