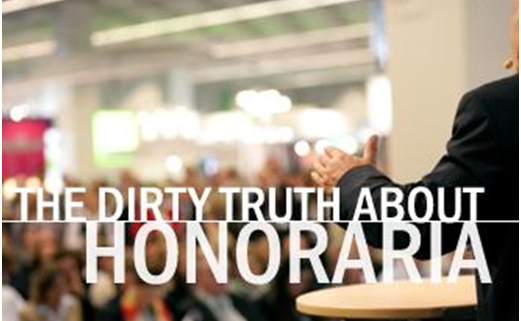 The way some Christian churches and other organizations pay their speakers, it makes me embarrassed to be a member of the same faith.

A friend of mine is a gifted staff worker with a well-known Christian organization on a university campus. He is married, with three young children, and works hard and long at his job. Frequently, he is asked to speak at churches’ youth retreats or special events sponsored by other groups. Rarely is he paid well for what is, in fact, overtime work–for audiences other than the one that pays his regular salary. One weekend, he left his family to speak at a retreat for more than 100 young people, each of whom paid to go away to a well-furnished camp for three days. My friend gave four talks and participated in a question-and-answer session—a typical, and demanding, schedule. But his work didn’t end there, of course. Retreat speakers are “on call” all weekend: for impromptu counseling, offering advice over mealtimes, and modeling what they preach on the volleyball court or around the campfire. Make no mistake: There is very little relaxing in that role, however restful the retreat might be for everyone else.

So at the end of this tiring weekend, at the close of the Sunday luncheon, the leader of the group thanked him profusely at the front of the dining hall (he had gone over very well). Then he tossed the speaker a T-shirt emblazoned with the group’s logo while everyone clapped. It took my friend several minutes to realize that this shirt was his total payment for the weekend’s work. He got in his car, without even a check for gasoline, and headed back to his waiting family.

An isolated and extreme example? Not at all. Every professional Christian speaker has stories like these.

A widely respected author was asked to headline a fundraising banquet for a women’s organization. She prepared a talk on the subject requested, left her husband and children at home, drove herself in the family car across the city to the site of the meal, chatted with her tablemates, and then delivered her speech. Again, it was apparent from the applause and the warm remarks that greeted her when she took her seat that she had done her job well.

The evening ended, and the speaker was saying her goodbyes. The convenor then appeared in a gush of appreciation. “Your talk was just excellent,” she said. “Exactly what we wanted. Thank you so much for coming!” Then, by way of payment, she grandly swept her arm over the room and said, “Just help yourself to one of the table centerpieces.”
We Christians have two problems in this regard. One might be remedied by an article such as this one. The other can be fixed only by the Holy Spirit.

The former problem is that most people who invite speakers are not themselves professional speakers and so honestly don’t know how much is involved in doing this work well. So let’s price it out straightforwardly and consider whether we pay people properly in the light of this analysis.

A speaker first has to receive the invitation, work with the inviter to clarify and agree upon terms (usually this takes correspondence back and forth), and confirm the date. Then the speaker has to prepare the talk. Sometimes, a speaker can pull a prepared text out of a file, but usually at least some fresh preparation is necessary to fit the talk to this particular group and its context. (And let’s remember that the speaker at some time did indeed have to prepare this talk from scratch, so the inviting group does have a share in the responsibility for that preparation since they will be benefiting from it.) The speaker concludes her preparation by printing out her notes and perhaps also prepares a photocopied outline or overhead slides or PowerPoint presentation for the benefit of the group.

Next, the speaker must make her travel arrangements and then actually travel. Most of this time is not productive: Airports and airplanes are not designed to aid serious work (unless the inviting group springs for first-class seats and airport lounges—an uncommon practice), and driving one’s car is almost entirely useless time.

The speaker arrives, and then has to wait for her particular slot. She finally gives her presentation, waits for everything to conclude, and returns home. If she is out of town, normally she will have to spend at least one night in a hotel room, probably sleeping badly in a strange bed and, again, spending time in transit that is largely unproductive.

Count up all of those hours. Not just the forty minutes she actually spoke at the banquet, or the four hours she was actually in front of the microphone during a weekend conference, but the many, many hours spent in the service of the inviting group from start to finish. Divide those hours into the honorarium, assuming her costs are covered (as they sometimes aren’t–for shame!), and you have the true wage the group paid her.

One speaker I know was asked to speak at a weekend conference requiring of her three plenary talks plus a couple of panel sessions. She would have to travel by plane for several hours and leave her family behind. The honorarium she was offered? Expenses plus $300. Her husband heard of it and replied with a rueful smile, “I’ll pay you three hundred bucks to stay home with us.”

Here’s yet another way to look at it. A speaker was asked to give the four major speeches at the annual meeting of a national Christian organization. He was also asked to come two days earlier than the staff meeting in order to address the national board twice. In return, he was offered travel expenses and accommodation for himself and his wife at the group’s posh conference center—of which they were extremely proud.

So the speaker asked for an honorarium of $2000: for the five days he would be away plus all of the time he would spend in preparation for this large responsibility. The group’s president immediately withdrew the invitation, saying he was charging too much. Is this good stewardship by a Christian nonprofit corporation? Or is it something else?

One wonders about the “something else” when one looks closer to home and examines the typical honoraria given to preachers who fill pulpits when pastors are on vacation. Most churches now pay $100 or so, although I know of many, including both mainline and smaller evangelical congregations, who still pay less.

Let us ask ourselves, before God, how we can justify paying a guest preacher a mere hundred bucks. He has to accept the invitation and get clear on his various duties from the person who invites him. He has to prepare the sermon—again, even if he is going to preach one he has preached before, he still has to decide upon which one to preach and then prepare to preach it well on this occasion. He has to travel to our church and take his place with the other worship leaders. He has to preach the sermon and greet people afterwards. Then he has to drive home.

Time it out, and it’s likely ten hours or more that he has invested in our church. We offer him a hundred dollars, and that works out to ten bucks an hour—a little more than minimum wage. He has to pay all of the taxes on that, so now he’s taking home between fifty and sixty dollars. Is that what we think our preachers are worth?
Let’s look at this from another angle. The average congregation isn’t large, so let’s suppose that about 200 people are to hear that sermon. By offering the preacher even $150 (which is more than most churches pay), we’re saying that his sermon is worth less than a dollar for each person who hears it.

The notion, however, that spiritual or theological or other “Christian” expertise should not be paid for is utterly foreign to the Bible. From the Old Testament requirements that generous provision be made for the priests to Paul’s commands in the New Testament that pastoral workers are worthy of their wages and should be paid such (I Corinthians 9), the Bible believes that people in such occupations are worthy of both esteem and financial support. Indeed, we show our esteem precisely in the financial support we give them. We think our physical health matters, so we pay good money for good physicians. How much does our spiritual health matter? Well, let’s see what we typically pay for it. We are, in fact, putting our money where our mouth is.

Thus, we encounter the latter problem, the one that only the Holy Spirit of God can address. It might be that we pay Christian speakers badly because we were unaware of all that is involved in preparing and delivering an excellent speech. Okay. But now that we know better, we should pay better. The latter problem of simply undervaluing such Christian service, however, is a problem in our hearts, not our heads. And the Bible is plain: We undervalue our spiritual teachers at the peril of undervaluing the divine truth they bring us. God frowns on such parsimony.

Indeed, God has threatened one day to mete out to each of us our appropriate wages for such behavior. And those wages will make even a T-shirt or a table centerpiece look pretty good.

John G. Stackhouse, Jr., draws on history, sociology, theology, and philosophy to explore the intersection of Christian faith and contemporary culture in North America and beyond. A graduate of Queen’s University at Kingston, Ontario, Wheaton College Graduate School, Illinois and The University of Chicago, he is the Sangwoo Youtong Chee Professor of Theology and Culture at Regent College.

More from John Stackhouse or visit John at stackblog.wordpress.com