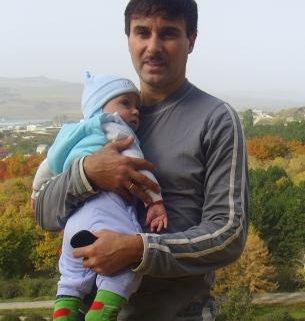 Good day Ralph. I am Alexander Gavrikov from Kurganinsk Krasnodar district (North Caucasus) greeting you. My team and I have been very inspired by your ministry in Yessentuki. Once again I want to thank the Lord for your ministry and obedience to Him.

I would like to give a little of my testimony about what was happening and what is going on in my life.

This year in February two of my friends invited me to come with them to Ukraine to be at a prophetic conference. My spiritual condition was not good, it was even bad. Your and Bob’s ministry has just shaken me, because the spirit of Jezebel has destroyed my ministry and church which I have cultivated. They suggested me to move to another city to be an assistant of pastor, and in a course of time I become a pastor there. But there also was a spirit of Jezebel in this church. It is difficult to reproduce the whole horror I have faced. I have been suppressed, disappointed, broken. The whole conference seemed to have been organized and held only for me and for the sake of me. It seemed as if you have lived during all these years nearby me; but the most interesting is that you have described in details my condition and those people whom I had faced before, just without calling their names. This message has brought me hope and the way out afterwards.

For the first time in my life I have heard that it is possible to prophesy in such a way to people. And of course I wanted you to be prophesied over but the conference was coming to its end. You have prophesied over two of my friends and it made my wish even more desirable. But it was the last day the last service and I consoled myself with the fact that God had brought me there to hear the teaching about spirit of Jezebel. But during the last minutes of the conference you have come to me and said – “You may think that it is not fair that there were three of you who have come here but only two received their prophecies”. I did not think that way but said “YES…. It is not fair!”

Afterwards it was something that has changed everything. Brothers were the first who gave me the words of prophecy and they seemed to have known everything about me and everything they said echoed in my heart. And when you began to speak, everything was going well till the moment when you said – “God calls you to learn English…” but all the rest words were not about me – “Examine thoroughly the Muslim culture, you will go to America in these five cities…” and so on. And I have thought that you have got tired! You warned not to approach in the end of service because when you get tired, can be mistaken. I have thought it precisely, you have overtired. You have told us beforehand not to come after the service to get prophecies because when you get tired you may make some mistakes. I have thought that you have overtired yourself. Right after the service we came up to you to say thank you, and you have asked me what I thought about the prophecy. I did not want to upset you with the thing that you might have made a mistake, but nevertheless I have told you my thoughts, expecting you to say some excuses like “time will pass and we will see…”, “if it is from God He will confirm it…” or “we got tired” etc. But what you have said has completely knocked me – “It is your destiny sonny!”

I went home with double feeling. On the one hand I was excited and rejoiced. On the other hand I was fully confused. But the Lord did not let me be confused for long time. When we arrived home I have decided not to share the prophecy with anybody except my wife and a missionary from Ghana which worked in our church at that time. The way he has got into our church is a different story, but all of us knew that he was brought by God. I thought that God have brought him so I would not die and if I die than it would happen on the hands of the anointed one. But at that point when I shared my prophecy with him suddenly I found that God has brought him in my life because he ministries in Muslim countries, in Malaysia, Indonesia, Papua New Guinea, and I have understood that there was a connection with my prophecy.  At that moment the prophecy has come to life. I have understood that my prophecy and his ministry are connected. Till that moment we have built friendly relationship with him and ministered in our churches. He comes to our church in every three months. After I shared my prophecy with him he has bought me an English Bible the next his visit.

The most difficult for me and unbelievable is the thing that I have to learn English. At school I studied German and I do not have any capability to study foreign languages.

But the prophecy itself knows how to do it. One sister from our church (a teacher of English in the past) said that God had put in her heart to teach me English. Another woman from Krasnodar-city who works at the airport (she is an acquaintance of ours) brought me a full package of English studying literature, I did not even ask her about it. And this is the little thing I can tell you. I did nothing but the prophecy did everything for me. Everything I do is keep my heart warm, listen to it and read it again and again as you taught us to do.

And one more thing, before your left from the house of Ilya you offered me some literature that you can send to me about five-fold ministry of evangelist. I will be very thankful to you for this help.