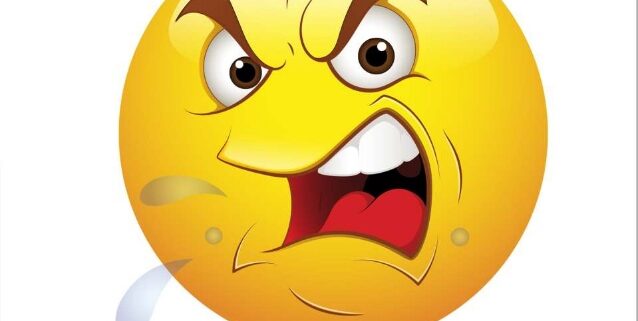 Let’s look at the rather dangerous issue of anger:

“Sometimes I Get Angry” – “Rage Rash”

Mark Twain once said: “Anger is an acid that can do more harm to the vessel in which it is stored than to anything on which it is poured.”

So, we want to look at this commonly occurring issue and see if we can find out what the Bible says about … “Neutralizing the Acid of Anger”

You are welcome to laugh at me for letting such little, petty things bother me so much

But how about you:

What causes your blood to boil?

What are your pet peeves?

What are some of those little habits of other people that make you want to push them down the escalator at the mall?

Now here’s an even bigger question:

How do you deal with your anger on a daily basis?

A volcano that eventually explodes and erupts

Yes, little things can irritate us

Do these issues upset you — keep you awake some nights — Make you angry?

Do they force you to change the channel or leave the room?

What really makes your blood boil?

What are the things that eat at you … stressing you out … robbing you of peace and joy in life?

Where does this anger come from?

And, maybe more importantly, what are we supposed to do about it?

The Bible has a few things to say about anger

In 15 different instances, the Bible mentions both the word anger and the word fire in the same verse

Fire is a gift that can sustain life

When it’s contained, when you control it, when you manage it

Fire can warm you

You can cook with it

You can use it to heat water for a warm bath

However, when a fire rages out of control and is not contained

It can destroy everything in its path

Wildfires can destroy thousands of hectares of timber, wildlife, and natural resources

Fire can even claim lives

The Bible points out that just like fire, our anger can be used constructively or destructively

Anger can cause us to fight for justice

Anger can cleanse, restore, and unite

But if we allow our anger to rage out of control (“Rage Rash”) it can lead us to hurt others, destroy relationships, and permanently wound people

Our anger can reflect God’s character

Or it can distance us from Him

When was the last time you invited the devil into your heart for a sleepover?

“In your anger do not sin”: Do not let the sun go down while you are still angry, and do not give the devil a foothold.”

The Message Version: “Go ahead and be angry. You do well to be angry—but don’t use your anger as fuel for revenge. And don’t stay angry. Don’t go to bed angry. Don’t give the Devil that kind of foothold in your life.”

Again, just like fire, there are two types of anger

The first, the “good” kind, is what we might call sanctified or righteous anger

Something that opposes His truth

This kind of anger leads us to a righteous reaction

We take a stand

We speak the truth

Sinful anger is getting angry at something

Maybe even something legitimate

Maybe something that also angers God

The second part of our verses from Ephesians says:

If you’re angry, you should deal with it

We give the devil a foothold

The Greek word for foothold is ‘topos’

It literally means “opportunity” or “location”

If you open the door to the devil through your anger, you are offering him a guest room inside your heart

Talk about sleeping with the enemy!

Both made offerings to God

Consider what God said to Cain:

“Why are you angry? Why is your face downcast? If you do what is right, will you not be accepted? But if you do not do what is right., sin is crouching at your door; it desires to have you, but you must rule over it” (Genesis 4:6-7)

You know the rest of the story

Cain let his anger overtake him and he murdered his brother, Abel

Cain opened it wide and allowed the enemy occupation

His lack of containment led straight to sin

And not just any sin, but taking a human life (murder)

However, if you’ve allowed your anger free reign enough to even wish someone else were dead, then in God’s eyes, you’re as guilty as Cain

In His Sermon on the Mount, Jesus explained…

We can murder them in our thoughts … with our angry thoughts

Jesus said that if we even call them “fool,” we are endangering our souls

“Raca” was an Aramaic term of contempt, similar to the way we use “idiot” or “jerk”

And, if we were being honest with each other, the terms we have thought of, and even said, when mad at someone are far worse

How does your anger usually manifest itself?

What is your default style of conflict management?

There are basically two ways people handle their “bad” type of anger….

Then you are a “Spewer”. You erupt like a volcano and spew over everyone who is near you and some who are not

Or, as the bible calls us – fools.

You might not explode and lash out, but your anger is still there

Instead of an exploding volcano, you’re more like a wildfire hiding below the tree line after a lightening strike

You hold a grudge and look for the opportunity for payback

David in the Old Testament was a frequent “Stewer”

Psalm 32:3 records a time when David was really upset and angry … but holding it all in

“When I kept silent, my bones wasted away through my groaning all day long.”

David bottled it up, like many of us do

We get upset, and rather than talking things out in a healthy way, we pour them into an internal crock pot and pressure cook them

But just below the surface, you’re smouldering, building up heat that could erupt into flames any minute

What “Stewers” practice is the opposite of love

1 Corinthians 13:5 says that love “is not easily angered, it keeps no record of wrongs.”

Whether served cold or hot, “anger stew” is a poisonous dish that will grow a cancer inside you

In the story of the prodigal son, you may remember the younger brother said, “Dad, give me all my stuff” (see Luke 15:2)

His father gave him his inheritance, and he left and partied hard – blowing through the cash faster than a first-timer in Los Vegas

When he finally came home, empty-handed and ashamed, everyone was shocked when his father loved him openly and took him back in

And not only did he take him back, he actually threw a huge party for him

When the older brother found out what was going on, however, he got so angry, he wouldn’t go in the house.

Stewing and storming around outside, the older brother finally let it out when his father came out to talk with him

“I kept all your stupid rules. I’ve worked like a dog for you and always did everything you asked. You never gave me a party! It’s just not fair (Luke 15:29-30)

No doubt the older brother was a classic stewer

Proverbs 17:14 says, “Starting a quarrel is like breaching a dam; so drop the matter before a dispute breaks out”

Regardless of whether we are a Spewer (volcano) or a Stewer (dam), we are likely going to wind up in the sewer unless we learn to control our response to our anger and express it productively

Either inside your heart

Or with external behaviour

While putting out the fire might feel impossible – it is a choice, a decision you make

You can control your anger with help

“But the fruit of the Spirit is love, joy, peace, forbearance, kindness, goodness, faithfulness, gentleness and self-control. Against such things there is no law.”

“Self-control” is ‘control of self by the Holy Spirit’

Add to this seeing things in the right perspective

Some things (in fact, a lot of things) are just not worth getting angry about

James 1:19-20 “My dear brothers and sisters, take note of this: Everyone should be quick to listen, slow to speak and slow to become angry, because human anger does not produce the righteousness that God desires.”

We need to grab hold of this truth….

And, along with this trait they mention a second one: “Abounding in love”

So there are basically three things we can do

2> Take time to process before speaking

3> Don’t jump straight to being angry

This requires a totally different type of response

His was a righteous anger – sanctified anger

One of my favourites is the story in Mark 3:1-6 about the man with a shrivelled hand

This man happened to be in the synagogue on the Sabbath

The Pharisees were there, too, watching Jesus to see if He might dare to heal someone on the Sabbath

Apparently, they considered performing a miracle on their holy day to be a monumental sin

Jesus seemed to know what they were thinking

In verse 4 Jesus asks them, “Which is lawful on the Sabbath: to do good or to do evil, to save life or to kill?”

They refuse to answer

In verse 5 it says, “He looked around at them in anger … deeply distressed at their stubborn hearts.”

But His detractors were watching His every move, hellbent on keeping God’s freedom out of their synagogues and temple

If I had Jesus’ power, I don’t know if I could have been so kind

I might raise my hands, and bam! They’d all have hemorrhoids

Okay, so maybe that’s just me

And that would be letting my anger lead me to sin

Instead, Jesus “said to the man, ‘Stretch out your hand,’ He stretched it out, and his hand was completely restored” (Mark 3:5)

We can do the same

It’s okay to be angry

You can be angry and not sin

Let the Spirit of God control your heart and mind

Not at the person or the situation

Put him on notice

Don’t be a Stewer or a Spewer

And, with righteous anger….

Are you sick of seeing disease and poverty and cruelty, maybe in another country or even in your own city

Get angry – and do something righteous about it

Do you love someone who’s wallowing in self-destruction, making one bad decision after another?

Get angry about the things that anger God

So, who’s in charge of your life?

Sin is crouching at your door

Allow the Holy Spirit to lead and guide you

Especially the fruit of self-control

Then, at all times be “slow to anger”

2> Take time to process before speaking

3> Don’t jump straight to being angry

The Gospel in 25 Simple English Words
Scroll to top