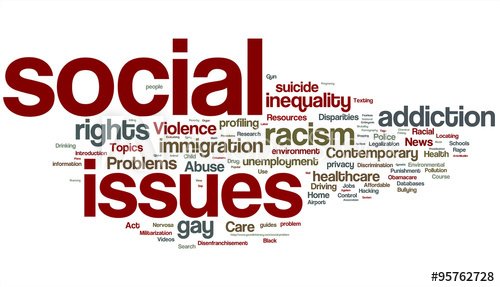 I believe that I am fairly in touch with the social issues of the day. I work with people who are on the frontlines of drug addiction and alcoholism. I work with people who were prostitutes both male and female. I see the violence that is involved in many marriages – not just physical but emotional and verbal; and not just the men abusing the women but also women abusing men. Social issues are many. Some are as old as the Bible and some are relatively new.

I am currently reading a book called “Beautiful Boy” written by a journalist who is telling the true story of his son and the family as the son slowly defends into serious drug addiction. I am reading it to become more familiar with what happens in and to the family of an addict as they watch a loved one decent into serious addiction sometimes ending in death. The house church I belong to is about to watch “Stopping Traffic” a real life story about sex trafficking of young children and young adult. A current form of slavery. We have a person who is involved in ministering to this group of people and we all want to know more so we can pray and even help end this epidemic.

Have you noticed that Jesus never spoke about social issues current in His day. In the Roman Empire at the time of Jesus there was rampant homosexuality, drug and alcohol abuse, unwanted children were taken to the fields to be left to die, slavery (the backbone of the labour force for the Empire), women were not treated with respect or dignity, prostitution (male and female), and on the list of social ills could go. In spite of all this Jesus never spoke about these issues nor did He directly address them in His teachings and in His discipling of the leaders of the Church – the early apostles.

Jesus simply treated people with dignity and respect. He introduced people to the Kingdom of God through His teachings and the miracles that He did among the people. He spoke of God the Father and how deeply and unconditionally He loves them. He spoke about being born again and having a relationship with the Living God, the Creator.

When people become part of His Kingdom through being born again the issues of the day, society’s problems, can be addressed and changed. These issues we face are really issues of the heart. So, Jesus aimed at the heart. Change the heart you change the attitude and motives, values and beliefs of the people. Then society’s issues can be addressed and changed.

The Church today is often so preoccupied with addressing the external problems that we forget the real root of these problems. So, we come across negative as we oppose so many things. People don’t see the love of Jesus. They see the judgment, condemnation, and rejection of those who do not believe as they do. Thus they see the Church as narrow-minded and of little relevance to the world in which we live.

And, because our focus is addressing the issues we forget or neglect to speak about the Gospel of the Kingdom which is the power of God unto salvation. And, we run programs in the hope of interesting those who are not part of the Church to join us. And, we wonder why the born again Church is not growing and has, in many places, a seriously negative reputation.

It is time to address the heart issue that causes the societal issues we get so upset about. It is time to focus on the Gospel releasing people from spiritual bondage. Shine the light in the darkness and stop yelling at the darkness.

We have the answer but we need to earn the right to be heard and taken seriously.

Confrontation –  Speaking the Truth in Love

Confrontation – Speaking the Truth in Love – Part One
Scroll to top