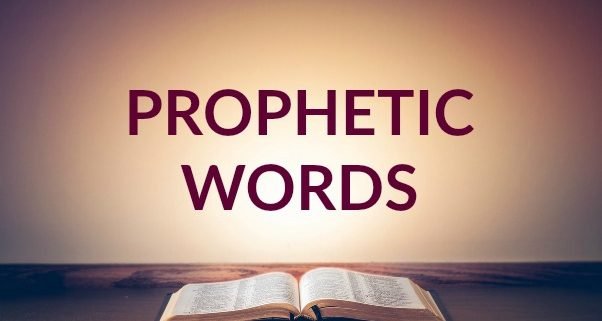 Just because a prophetic word has a valid and true message to it does not mean it is a true prophetic word. There are many words spoken that contain truth and are accurate that the Bible would say are false prophecy.

And, just because someone can move in power and perform miracles, signs, and wonders does not validate their prophetic words as true and from the Spirit of Christ. Jesus stated: “For false christs and false prophets will arise and perform great signs and wonders so as to lead many astray, if possible, even the elect” (Matthew 24:24). In other words, those who are false prophets and apostles will sound good and look good thus deceiving many, even the elect of God, as they will be able to perform miracles that will be impressive and amazing.

Paul continues this thought when writing to the Church in Corinth when he states, “For such men are false apostles, deceitful workmen, disguising themselves as apostles of Christ” (2 Corinthians 11:13).

True and false apostles and prophets can do similar miracles, signs, and wonders. And, when they speak and declare something “prophetically” they will sound like the real deal, their words will line up with Scripture, and what is spoken can come to pass – even though some of them would be declared as false workmen.

In Acts 16, we see Paul and Silas confronts by a young woman who is speaking prophetically about them.

“One day, as we were going to the house of prayer, we encountered a young slave girl who had an evil spirit of divination, the spirit of Python. She had earned great profits for her owners by being a fortune-teller. She kept following us, shouting, “These men are servants of the Great High God, and they’re telling us how to be saved!” Day after day she continued to do this, until Paul, greatly annoyed, turned and said to the spirit indwelling her, “I command you in the name of Jesus, the Anointed One, to come out of her, now!” At that very moment, the spirit came out of her!” (The Passion Translation)

Here we see a prophecy being given publicly by a young lady. Her words were: “These men are servants of the Great High God, and they’re telling us how to be saved!” That was true. Paul and Silas were men of God, called by God, and empowered by God’s Spirit. And, they were declaring the Gospel of the Kingdom and thus the way – the only way – to salvation. So, the words she spoke were true but it was a false prophecy.

Many of the words spoken over people by those who call themselves witches, warlocks, and psychics also are true and come to pass. Otherwise, people would not continue to use their services and pay large sums of money to hear about their future. But these words would be considered false prophecy as well.

What makes a prophetic word false? There are three things that determine if a word is true or false even when the content might be true.

1> What is the motive of the person giving the word. In this case it was to earn money for her masters. Paul writes that the gifts, including the gift of prophecy, is freely given by the Holy Spirit and those who move in this gift use the gift to benefit all others and not themselves (1 Corinthians 12). So, the motive of the prophetic ministry and minister help us to determine if a word is a true prophecy or a false prophecy.

2> Secondly, we look at the source of the words. In this case in Acts 16 it is an evil spirit or what we refer to as a demon. This young girl is definitely possessed and the source of her ability to speak truth is thus a demonic force. Some scholars will tell you that this young girl is under the influence and power of the python spirit. We know it is a demon as Paul eventually tires of her following them and casts the demon out of her.

Jesus, the early church, and the apostles chosen by Jesus all warn of false apostles, prophets, and teachers as well as false prophecies and how easily true believers can be deceived and drawn away from the faith and lose their salvation. We should heed their warnings and carefully examine all the words given and the people who speak them.

It seems that God is speaking a lot. And, I am deeply concerned that many of the things He is supposedly speaking about contradict each other. Other words simply don’t line up with the written word of God, the Bible. And, many are being deceived by these words so freely spoken and shared.

We all know that God does not contradict Himself so not all prophetic words out there today are His Words. And we know that God never speaks contrary to what is written in His Word, the Bible. And, numerous words I have read are in direct contradiction to what the Bible teaches. So, this points to the need to be discerning and not just accepting because someone said it is a prophetic word from the Spirit of God, the Holy Spirit.

The issue I have with many of the words is that those posting them apparently lack any sense of discernment as to what is truly a word from the Lord and what is simply a person’s desire, dream, or their soul speaking. And, many of the words published that do seem to be the Lord sometimes are for the person or ministry that published them and not for the general population or even for the family of God. A personal word is shared and becomes corporate.

I personally read very few prophetic words that are published – even when published by some of the more well known ‘prophets’ and ‘apostles’ of our day. I simply don’t find them edifying and they often do not fulfill the three biblical purposes of the prophetic – to build up, the cheer up, to stir up (1 Corinthians 14:3). I prefer to invest my time in reading His Word as recorded in the Scriptures and seeking His face to hear His voice for myself personally and for the ministry He has given to me. And, those I don’t publish.

The Bible states (1 Thessalonians 5:20-21) that we are to test the prophetic words spoken to us personally, to the local church, to the Church, to a region or a nation… Test them to see what spirit is behind them. Where do they originate? Not all prophetic words are from the Holy Spirit as there are many false prophets ministering today in the Church and in the nations. And, many who are using the gift of prophecy do so for their own gain and notoriety which is also not biblical as the gift is given for others to benefit and not just the person with the gift benefitting – noted in Paul’s letter to the Corinthians (1 Corinthians 12:7).

Of course, the other issue is what are people doing with the prophetic words that they hear? If they are discerning and test the spirit (source) as well as test what is being said to the Scriptures, then most of the words would be tossed. So, you would do nothing with them and not even think about them again.

I understand that this is my opinion but it is an opinion based on 40+ years of prophetic ministry.

For those words that register as biblical and from the Lord we need to act on them. In other words, do more than get excited and forward them to others or post them on your Facebook page. Personally act on what you know to be God’s voice to you. Obey what the Word has stated to you and do it immediately. Then your world will change, you will be walking in the center of God’s current will for your life, and you will be challenged and stretched.

Let’s not worry about the Church or seek for a word for your region or another nation … you need to hear God for yourself and then walk in what you know to be His specific Words to you.

As a result you and the church will have little time or interest in reading all the words that people are posting in the name of the living God.

A side note: If you are a leader in a local church and God speaks to your local church prophetically – make sure that the Word is reviewed and acted upon. In other words, bring the people past the “that was nice” stage and into agreement with the word resulting in action being taken in line with the Word.