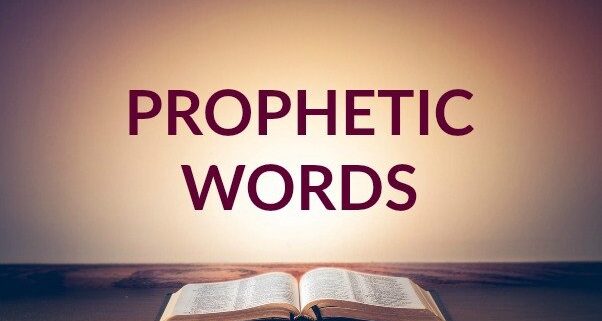 I had a person send me a verse that had really spoken to them during their time with the Lord. It was Proverbs 29:18a which reads, “When there is no prophetic vision the people cast off restraint…” (NET)

A vision was an encounter with the living God – auditory or visual – that gave God’s people direction for the coming season in the nation of Israel.

(Time lapse – now a future event) I will produce portents both in the sky and on the earth – blood, fire, and columns of smoke. The sunlight will be turned to darkness and the moon to the colour of blood, before the day of the LORD comes – that great and terrible day! It will so happen that everyone who calls on the name of the LORD will be delivered. (NET)

Peter, in the first sermon of the Christian Church, quoted Joel in relation to what they had just experienced – the Baptism of the Holy Spirit and the release of the gift of tongues. However, he altered it slightly adding an extra reference to “prophecy” as the early Church was birthed to be a prophetic voice to the nations … not a pastoral church simply caring for the sheep.

Acts 2:16-21 “But this is what was spoken about through the prophet Joel: ʻAnd in the last days it will be,ʼ God says, ʻthat I will pour out my Spirit on all people, and your sons and your daughters will prophesy, and your young men will see visions, and your old men will dream dreams. Even on my servants, both men and women, I will pour out my Spirit in those days, and they will prophesy. And I will perform wonders in the sky above and miraculous signs on the earth below, blood and fire and clouds of smoke. The sun will be changed to darkness

and the moon to blood before the great and glorious day of the Lord comes. And then everyone who calls on the name of the Lord will be saved.ʼ” (NET)

In the Proverbs verse, the standard understanding of this half verse is that it refers to exhortation to the community (Psalm 74:9). It is a Word of the Lord received through a vision of what the Lord is wanting His people to know and do. The verse goes on to say that without this prophetic direction – without the guidance of divine revelation, people abandon themselves to their own sinful ways. Of course, this happened frequently in Israel (Exodus 32:25; Leviticus 13:45; Numbers 5:18).

Israel had seasons when the prophetic revelations were not guiding and directing them either because they were disobeying what the Lord had spoken or, as these verses indication, it seems that God was apparently simply not bringing fresh revelation to his people.

1 Samuel 3:1 says, “Now the boy Samuel continued serving the LORD under Eliʼs supervision. Word from the LORD was rare in those days; revelatory visions were infrequent.”

This time of the Judges in Israel was a period of extremely limited prophetic activity. The few visions that God did give were not widely known.

Amos the prophet also spoke of this … “Be certain of this, the time is coming,” says the sovereign LORD, “when I will send a famine through the land – not a shortage of food or water

but an end to divine revelation! People will stagger from sea to sea, and from the north around to the east. They will wander about looking for a revelation from the LORD, but they will not find any.”

Today we seem to be receiving an avalanche of prophetic words. Day after day I receive messages from believers here in North America with links to new prophetic revelations that the Church is receiving. Just go on the internet and type in “prophetic words” and you will be good for a week or two of 10 hours a day reading and sifting through various people’s prophetic visions and words which they claim the Lord has given to them.

I have several thoughts about this phenomenon.

1> It is amazing that the Lord is speaking so often and in such detail to and through the North American Church and yet seems to be fairly silent to the Church in so many other nations. Yet, the church in these other nations are more spiritual alive and alert than most here. And, definitely more actively engaged in the Great Commission.  (Note that Joel and Acts talks about people being saved as a result of the prophetic).

2> Maybe a lot of these words being received are not from the Lord and thus a distraction from what the Church in North America should actually be doing. You know, what He has already spoken as recorded in the Bible – “seeking and saving the lost” (Luke 19:10).

3> It seems to me that there is little discernment being applied to the words being received. No judging the word according to God’s Word, the Bible, and the season that the Kingdom is in. It seems to me that if someone says “The Lord told me…” people automatically believe the word. Scripture tells us we are to test the words and check the source (1 Thessalonians 5:19-21).

4> Seldom do we hear a prophetic word that states the need to “repent and turn back to the Lord” and yet this is just the message that the Church and the people in North America need to hear. And, may I mention, that it is one of the basic messages of the prophets both in the Old and the New Testament including a now Word from the Lord Himself (Mark 1:14-15).

5> I have been following the Lord and prophesying for over 45 years and have been following the declared words of other ministries. The problem is I seldom see any of them bear fruit or come to pass. They often earn a good living for the ministry publishing the words but apparently there is little fruit for the church or the people to whom we are sent.

6> Often times I believe we are simply speaking to ourselves the things we want to hear. When actually the true prophetic word comes from the Lord through the Church and is for the society at large to hear.

7> The Church is not growing or becoming stronger as a result of its preoccupation with all these prophetic words. In North America statistics show that we are growing smaller and smaller and are no longer influencing or impacting the culture and society that we live in.

8> Many of the prophetic words are so out of it that they are causing the church to be seen as out of touch, irrelevant, and of no value in the life of the community. In fact, at times, idiotic.

Just some thoughts about the multitude of prophetic words floating around and occupying so much of the believers time.

Don’t get me wrong, I deeply believe in the true prophetic. But, I don’t see much of it active today in today’s church.

Take Up Your Cross
Scroll to top