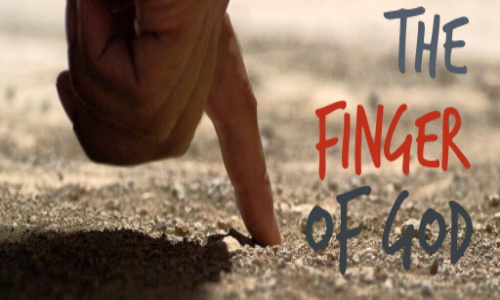 Saw an advertisement for KFC and their “finger lickin’ good” slogan…. And though about what God likes to do with His fingers: run them across the earth out west to form the Grand Canyon. Or pinch some dirt together and form Mount Everest. It’s true! Here’s what the Bible says: “When I look at your heavens, the work of your fingers, the moon and the stars, which you have set in place, what is man that you are mindful of him, and the son of man that you care for him?”

God is so big that all He needed to create the universe were His fingers.

Actually, He didn’t literally use His fingers to create stuff. David wrote about God’s fingers because He knew that humans cannot really comprehend how big God is, and so he used human characteristics to describe Him. It’s a literary technique called anthropomorphism, something poets used to help us wrap our human minds around the divine. In another psalm, David said that God spoke the universe into existence. I really don’t know how the earth was formed; even the smartest scientists who study these things don’t know for sure. What I do know for sure is that it took a really big God to give us the universe.

And not only does He suspend the earth over nothing, God tilted the earth at a twenty-three degree angle so we can experience winter, spring, summer, and fall. He also spins the earth on an invisible axis at the rate of one thousand miles an hour so we can have night and day. Then He orbits this sextillion ton behemoth we can home around the sun at the rate of sixty-seven thousand miles an hour. At that speed it’s a wonder none of us have been blown off the earth!

Jupiter, one of our nearest neighbours is more than 390 million miles away. Yet we have discovered that this largest planet in our solar system has sixty-three moons. A few are visible from earth with a telescope. Jupiter and the earth are just two planets in a universe of billions of galaxies that God created and that He suspends over nothingness.

Brennan Manning wrote in his book The Ragamuffin Gospel  that if you held out a dime at arm’s length while gazing at the night sky, the coin would block out 15 million stars from your view, if your eyes had the power to see that far into space. Manning’s observation reminds me of what God said to Abraham: “Look toward heaven, and number the stars, if you are able to number them” (Genesis 15:5). After looking up, Abraham surely must have concluded that God is big, and that He has big fingers.

We worship and serve a big God! An amazing and powerful God! A loving and gentle God who knows each one of us by name! Never let a day go by that you don’t marvel at all that He has created and give Him thanks for still intimately knowing your every thought and feeling.