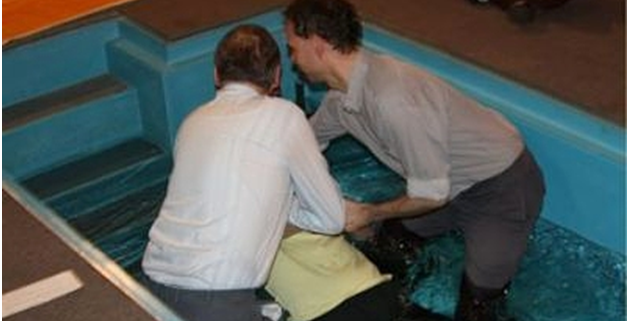 OM Turning Point Team’s Yeni YaÅŸam from New Life Turkish Fellowship is rejoicing at the recent baptism of a Turkish-Kurdish believer who discovered new life in Jesus in a surprising experience. (OM International)

Keeping you informed of Mission issues and successes – for your prayer consideration as well as Ralph heads to Turkey at the end of February for 8 days of consutation ith Christian Leaders.

OM Turning Point Team’s Yeni YaÅŸam from New Life Turkish Fellowship is rejoicing at the recent baptism of a Turkish-Kurdish believer who discovered new life in Jesus in a surprising experience. (OM International)

Mehmet* was brought up in an Alevi family in a town in southeast Turkey. Alevis belong to a minority branch of Shia Islam and are frequently viewed by the majority Sunnis as unorthodox because of their liberal interpretation of Islam: They do not attend mosques, perform the ritual prayers five times a day or fast during Ramadan.
However, as is common among Turkish Alevis, Mehmet was greatly influenced by the prevailing Sunni religious culture and society that surrounded him. Yet he always harboured doubts about what he was being taught.

In time, he came to reject Islam entirely and became an atheist. He later softened somewhat and described himself as a “deist”: someone who believes in the existence of God but is not committed to any religion. He moved to London and soon found himself caught up in the tidal wave of decadent Western culture.

“Because I was living in London, I gave way to bad instincts—drink, women, gambling—and I was drowning in these evils,” said Mehmet. “I was unable to think of anything good.”

To escape his circumstances, Mehmet settled in Germany but came against problems with work. Because of this, he spent his time constantly on the Internet. One day he came across a chat room called the “New Testament Good News Turkish Christian.”

“I was astonished,” shared Mehmet. “I said to myself, ‘Is it possible for there to be any Turkish Christians?’ Then I entered the chat room in order to curse and mock them.”

As he listened, he was suddenly overcome by a great feeling of sadness. “I couldn’t figure out what was happening to me,” he said. “While I had been joyful, suddenly I became unhappy. I continued entering the chat room for some days, and after a week I heard a voice in the room telling me to believe, and I came to faith. Hallelujah!”
Mehmet returned to the U.K. and made contact with the Yeni YaÅŸam Fellowship in North London. He indicated a desire to be baptized, so the team leaders went through the baptismal preparation lessons with him.

Still, Mehmet could not find employment in London. He decided to go to North England to work in a kebab restaurant, but recently returned to London because he had missed the fellowship of believers.

He was finally baptized on Nov. 13 and shared how the Lord had turned his intention to curse and mock into deep conviction of sin, which lead to repentance and salvation.

Now Mehmet is regularly online, witnessing to other Turkish-speaking Muslims in Turkey and around the world in the same chat room where he came to faith.
Life is tough in London for Mehmet. He lives with friends but needs to find a place of his own and a source of income. He hopes to take a course that will lead to a vocational qualification.

Please pray for God’s provision and protection. Pray that Mehmet will continue faithfully with the Lord and grow in spiritual maturity.

Grace and Truth
Scroll to top