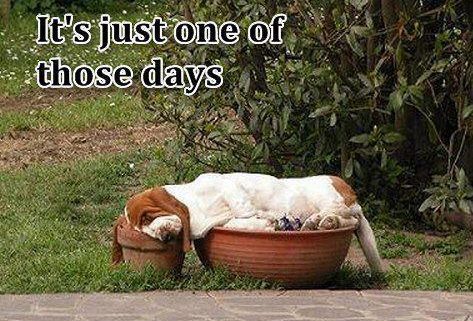 Henry Ford once said, “When everything seems to be going against you, remember that the airplane takes off against the wind, not with it.”

If you are having one of those days when everything seems to be going wrong and you are struggling just to stay sane and get through it without killing someone or simply giving up altogether …. Remember that you need to rise up, face the current ‘hard thing’ that is happening and let the ‘wind’ push you up and over.

Years ago, during a particularly hard time, the Lord taught me that “dead fish float downstream.” And that “live fish swim upstream to span and birth new life.” Since then I have welcomed the hard days and simply see them as an indication that I am alive and facing a new challenge – another time to swim upstream and not give up and simply go with the flow and float downstream.

I work hard to remember, in the midst of the hard time and current challenge, that “If God is for us, who can be against us?” Paul asks that question that then proceeds to answer it

Romans 8:32 “Since he did not spare even his own Son but gave him up for us all, won’t he also give us everything else?”

Romans 8:35 “Can anything ever separate us from Christ’s love? Does it mean he no longer loves us if we have trouble or calamity, or are persecuted, or hungry, or destitute, or in danger, or threatened with death?”

His answer is a definite NO! Paul tells us this in Romans 8:37….

“No, despite all these things, overwhelming victory is ours through Christ, who loved us.”

Another version – a bit more expressive and accurate to the original states- “No, in all these things we are more than conquerors through Him who loved us.”

It’s important that we acknowledge that this promise is fulfilled not through our own power but through the power of the risen Christ, who loves us. If you follow Christ, you are more than a conqueror, more than an overcomer.

The little Greek word that appears in various translations as “conqueror,” “winner,” “victor,” or “overcomer” is the word niko, which means “to win, to be victorious, or to gain a surpassing victory.” But that’s not the word used in this passage. The word Paul uses here is hupernikao, which means “to vanquish beyond recognition, to gain a decisive victory, to conquer exceedingly.” With Christ, you are hupernikao! You are not going to just eke out some tiny, insignificant victory. No, you’re going to demolish the opposition.

Your victory is the God kind of victory, where God vanquishes the opposition beyond recognition. Imagine Pharaoh’s army chasing the Israelites to the edge of the desert, and God parting the Red Sea in front of them. The Israelites cross on dry land, and the entire Egyptian army follows them in. Then God withdraws His hand, and whooooosh! all of them are washed away. It’s total victory!

Consider Gideon, God’s reluctant warrior, in my butchered paraphrase from Judges 6 – 8, God tells Gideon, “I want you to take on the Midianites.”

But Gideon responds, “I just can’t do it! I’m too scared!”

“No! You’re a mighty man of valour,” God tells him. “You might not believe it yet, but you are!”

“But I have only thirty-two thousand men!” Gideon whines.

God shoots back, “You’re right. That’s no good. That’s way too many for Me to get the glory!”

So God pares those down to just three hundred and tells Gideon, “Now, you guys take your weapons and your pitchers. Light some torches, cover them up, blow your horns, and break your pitchers.”

Gideon says, “Uh … I’m sure you don’t know what you’re talking about, but we’ll do it. You are God and everything … I guess.”

Then when Gideon’s men work God’s plan, the whole Midianite army turns on itself in confusion and wipes itself out. And that is hupernikao. That is who you are in Christ! You’re more than victorious., You are hupernikao

Now, what I’m not saying is that you’ll never have a hard time in life. The Bible doesn’t say that at all. Jesus makes it clear that “in this world you will have trouble.” But think about this for a minute: to be an overcomer, you have to have something to overcome. And Jesus continues, “But take heart! I have overcome the world” (John 16:33).

God’s Ultimate Over Your Immediate
Scroll to top