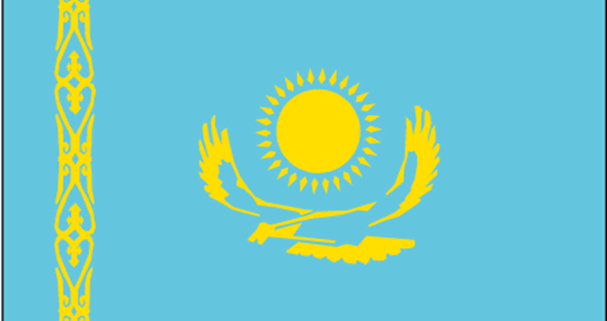 Astana is the first capital being built in the 21st century and it perfectly represents where the world is headed. It is truly one man’s vision: Nursultan Nazarbayev, the president of Kazakhstan (yes Borat’s country, I know). Backed by billions of petrodollars, the city is being built from scratch in a remote and deserted area of the Asian steppes. The result is astonishing: a futuristic occult capital, embracing the New World Order while celebrating the most ancient religion known to man: Sun Worship. The city is still a huge construction site, but the buildings that are already completed already sum up Nazarbayev’s occult vision.

The Pyramid of Peace

Conceived by Britain’s most prolific architect, Lord Norman Forster, this giant pyramid is an odd presence in the middle of the Asian Steppes.  The building is dedicated to “the renunciation of violence” and “to bring together the world’s religions”. Norman Foster has said that the building has no recognizable religious symbols to permit the harmonious reunification of confessions. In reality, the pyramid is a temple for the occultist’s only TRUE religion: Sun worship. A journey inside this building is a truly symbolic one. It represents each human’s path to illumination. Let’s take the tour.

“The initiates accepted the pyramid form as the ideal symbol of both the secret doctrine and those institutions established for its dissemination”
-Manly P. Hall, Secret Teachings of All Ages

As Manly P. Hall stated, the pyramid is the ultimate symbol representing the mysteries of ancient civilizations. Sublime in their simplicity, divine in their proportions, they embody both the divine knowledge owned by the illuminated and the bewilderment of the masses. Today’s elite, initiated to the occult, are the heirs of this ancient wisdom and use the pyramid as a symbol of power in the modern world. The illuminated/floating/missing capstone represents the divine principle present in the universe as well in each human being. Another symbolic meaning attributed to the missing capstone is the unfinished nature of the New World Order. It is said that the capstone of the Great Pyramid will be reinstated when this age old project will become reality. Here are other pyramids appearing across the world, representing the elite’s power over the masses.

When entering the pyramid at ground level, the interior is dark and cavernous. The basement houses Astana’s opera house, where the unsuspecting mass gets entertained.

Despite the darkness, a huge image of the sun occupies almost all of the ceiling.

Around the Sun Table

Right on top of the opera house is the central space of the pyramid. It acts as the meeting room for conferences reuniting religious leaders of the world. Take a minute and soak up the symbolism here. You have religious leaders from around the world sitting around a huge figure of the sun, discussing how to reconcile their differences for the coming New Age. The symbolism is blatant:  all these theologies are simply outgrowth of the original object of worship: the Sun.This space is much more luminous than the opera house, representing the progress towards illumination. The sun image in the middle of the round table is exactly on top of the sun of the opera house. So while the general population is being entertained in the darkness of the material world, the illuminated, sitting right on top of them, are contemplating how to reach godliness.

The apex is literally heavenly. It is round, totally windowed and bathing in glorious sunlight. Images of white doves are embedded in the windows, representing peace, which will result in the unification of the world governments and religions in the New World Order.  The apex is the ultimate representation of the achievement of illumination, on an individual and on the worldly level.Look at the ceiling of the apex:

The solar deity is shining upon the illuminated. Beautiful!The pyramid’s divisions (the lower dark

opera house, the middle conference room and the godly apex) embody the Pythagorean vision of the world. Pythagoras’ teachings are thoroughly studied in today’s occult societies.Pythagoras divided the universe into three parts, which he called the Supreme World, the Superior World, and the Inferior World. The highest, or Supreme World, was a subtle, interpenetrative spiritual essence pervading all things and therefore the true plane of the Supreme Deity itself, the Deity being in every sense omnipresent, omniactive, omnipotent, and omniscient. Both of the lower worlds existed within the nature of this supreme sphere.The Superior World was the home of the immortals. It was also the dwelling place of the archetypes, or the seals; their natures in no manner partook of the material of earthiness, but they, casting their shadows upon the deep (the Inferior World), were cognizable only through their shadow. The third, or Inferior World, was the home of those creatures who partook of material substance or were engaged in labor with or upon material substance. Hence, this sphere was the home of (…) mankind and the lower kingdoms, those temporarily of the earth but capable of rising above that sphere by reason and philosophy.
-Ibid

The three sections of the Pyramid

Also designed by the distinguished British architect Sir Norman Foster, the monument is meant to embody a folktale about a mythical tree of life and a magic bird of happiness. The bird, named Samruk, had laid its egg in the crevice between two branches of a poplar tree. The egg – the golden globe at the top of the monument – represents, once again, the Sun, the Supreme Deity.This “tree of life”, represents the channel through which spirits go to leave the material world and join the divine world. This concept is a recurrent in most (if not all) esoteric societies.

Inside the Golden Globe

Visitors can go at the top of the tower and get a wonderful view of Nazarbayev’s city. There are also some strange items to look at.

Inside the globe we find this enigmatic “thing”. It’s a golden triangle with president Nazarbayev’s handprint in it. Why? I honestly don’t know.

It is a globe signed by representatives from seventeen religious denominations. Yes, once again, talking about uniting all religions into one for the NWO and all of that.

Two pillars and one in between, further away. Is there a chance that this may be Masonic symbolism?

Yes, the twin golden pillars represent the two pillars of Masonry named Boaz and Jachin. I won’t go into the whole symbolism behind those pillars, but we can probably assume that Nazarbayev is a “Free and Accepted Mason”.

Placed in a commanding position in the city, the Presidential Palace sits at the end of a ceremonial route which starts with the Bayterek tower. A big fat dome sits on top of the palace, representing the female principle, in opposition to the phallic Bayterek tower – the male principle. This layout is present in almost all important cities, including Washington DC and Paris.

This unfinished oddity is designed; once again, by Sir Norman Foster (he basically designed the whole city). Underneath the tent, an area larger than 10 football stadiums will be an urban-scale internal park, shopping and entertainment venue with squares and cobbled streets, a boating river, shopping centre, mini golf and indoor beach resort. It has been said that this structure is made to look like a tabernacle, on par with the Temple of Solomon.

These portable places of worship, composed of tents, were used by Jews during biblical times. Initiates attribute to these ancient settlements an esoteric meaning.

The Secret to Effortless Success, Wholeness and Victorious Living

Disqualifying Ourselves
Scroll to top