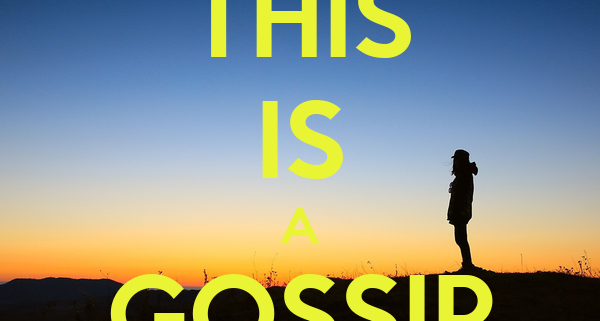 God set forth ten commandments for His people. One of them states that we are not to bear false witness. In today’s terminology we might say that a person should not be involved in gossip. Gossip always involves speaking things that are not entirely true. And, even if the facts are accurate, you are only hearing one side of the story and thus missing perspective. And, believe me, perspective can make all the difference in understanding a situation accurately.

Interesting: the people being gossiped about hate it, and God hates it. So before you post an on-line posting, a comment, or a link, consider three sets of questions to keep yourself gossip-free online and thus not in sin. Breaking any one of the commandments is, according to James, a sin.

Before you comment on anything online, ask yourself the first set of questions: “Is what I’m about to say helpful or hurtful? Will this build up or tear them down? What’s my intention behind what I’m about to type?”

Paul surely never dreamed of the technological advances we have today. But he still directly addressed our tendency to gossip: “Do not let any unwholesome talk come out of your mouths, but only what is helpful for building others up according to their needs, that it may benefit those who listen” (Ephesians 4:29). If what you intend to communicate is unwholesome, don’t type it. Don’t tweet it. Don’t post it. As followers of Jesus, we want everything we say to build up others. The Bible tells us, “A scoundrel plots evil, and on their lips it is like a scorching fire. A perverse person stirs up conflict, and a gossip separates close friends” (Proverbs 16:27-28).

We all hate when others gossip about us or someone we love, but we don’t always realize how quickly we can fall into gossiping ourselves. Sometimes we even think we’re being honest, but actually we’re disguising a dig. You know what I’m talking about. We start with something positive before sharing what we really think — the proverbial turd rolled in glitter.

Even Christians fall prey to deceiving ourselves in fairly elaborate ways.

One young pastor writes: “When I was a new Christian in college, I never wanted to miss the Thursday evening prayer meeting because if you did, you were fair game. ‘We need to pray for Craig,’ other Christians would say. ‘He doesn’t seem as passionate about God as he use to be. If he was, he’d been here praying with us. And did you hear that he said another bad word during practice? Yep, we definitely need to pray for him.’ One time they were praying in my living room, and I had a test early the next morning. About 11:00p.m., I told them I was going to bed. I actually heard one guy tell the group they needed to pray for me because I cared more about my class than I did about God’s presence.”

Now in that same spirit of carefully disguising gossip as well-intentioned prayer requests, many make their “concerns” public on Facebook or some other form of social media. We’ve all heard or seen these kinds of prayers, if we have not been the person praying them.

While it’s always good to pray, not all prayer requests belong online. At least not with the kind of descriptions that imply something you may know very little about in someone else’s life. If you’re going to request prayer online, do it in a way that doesn’t make others look bad.

Maybe you’re inclined to push back and argue, “But, Ralph, it’s okay to talk about things if they’re true, right?” Not necessarily. Everything you say should be true, but not everything that’s true should be said. Before you type it, ask yourself, “Is this helpful? Or hurtful?

The Price of Peace – Part Two