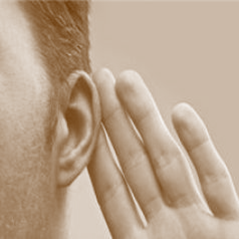 God never says anything unless it is important and worth remembering

God speaks clearly because He has specific objective in mind

When God speaks to us, His first goal is that we may comprehend (understand) the Truth

1 Corinthians 2:9 But as it is written: “Eye has not seen, nor ear heard, nor have entered into the heart of man the things which God has prepared for those who love Him.”

But God has solved the problem Paul is expressing

1 Corinthians 2:10 But God has revealed them to us through His Spirit. For the Spirit searches all things, yes, the deep things of God.

He perfectly knows the mind of God

1 Corinthians 2:12 Now we have received, not the spirit of the world, but the Spirit who is from God, that we might know the things that have been freely given to us by God.

Greek for “know” is ‘oido’ which means “fullness of knowledge”

There are three primary areas God wants us to comprehend

First of all, He wants us to know the truth about Himself

He wants us to grasp His majesty

As we grasp (comprehend) these mighty truths about the person of God our lives are:

Paul’s goal was to know God – Philippians 3:10 that I may know Him and the power of His resurrection, and the fellowship of His sufferings, being conformed to His death

The Amplified Version: “[For my determined purpose is] that I may Him [that I may progressively become more deeply and intimately acquainted with Him, perceiving and recognizing and understanding the wonders of His Person more strongly and clearly], and that I many in that same way come to know the power outflowing from His resurrection [which it exerts over believers], and that I may so share His sufferings as to be continually transformed [in spirit into His likeness even] to His death …

Paul knew Him in the many facets of His personality

Jesus as Deliverer from a Philippian jail

As Comforter when being whipped and flogged

Healer on the Isle of Malta

Guide on his apostolic journeys

Second, God wants us to know the truth about ourselves

1 Corinthians 1:30a But of Him you are in Christ Jesus…

God wants us to know and walk in supernatural power (power)

Thirdly, God wants us to know the truth about other people

That as believers they are instruments in His hands

Once we know these truths – about God, ourselves, and others we are more thoroughly equipped to be fruitful, productive servants of God here in our world.

Conformed to the Truth

Romans 8:29b … to be conformed to the image of His Son, that He might be the firstborn among many brethren.

How is God going to conform us to His image?

By revealing the truth of His likeness

If we rebel and refuse to conform then the world will squeeze us into its mould (Romans 12:2)

Shaped and conformed to His truth

God never speaks in order to entertain us

James 1:23-24 For if anyone is a hearer of the word and not a doer, he is like a man observing his natural face in a mirror;  for he observes himself, goes away, and immediately forgets what kind of man he was.

Not just hear – we are to obey

Not just glance at the Word – grasp the Word

God never gives us anything to keep for ourselves

Money, insight, or truth – it has to be shared

Matthew 28:18-20a Then Jesus came and spoke to them, saying, “All authority has been given to Me in heaven and on earth.  “Go therefore and make disciples of all the nations, baptizing them in the name of the Father and of the Son and of the Holy Spirit, “teaching them to observe all things that I have commanded you …

Acts 1:8a “But you shall receive power when the Holy Spirit has come upon you; and you shall be witnesses to Me …”

They were to give away everything they had received

2 Timothy 2:2 And the things that you have heard from me among many witnesses, commit these to faithful men who will be able to teach others also.

Passing on to others everything that he had learned from Paul

We are called as Christ’s ambassadors (2 Corinthians 5:20) and as ambassadors we are to communicate what the King of the Kingdom we represent tells us on a daily basis

The divine Plan and purpose of God

The scriptural principles by which humans are to live

So now, be honest with yourself, and evaluate your responses to God’s communications in your own life

How God Gets Our Attention
Scroll to top