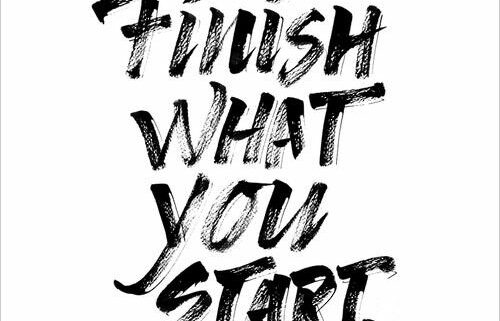 Last time I was sharing about my personal motto: Never Stop Starting.

Today, let’s talk about “Finish What You Start” which is sort of the follow up to the blog before this one (February 19, 2021).

Let’s face it. You can have a great vision, pray godly prayers, choose the right goals, and focus on the right things. So far, so good. You can also pursue your dreams and make huge investments in God’s Word, His work, and His wealth. You can do all these amazing and wonderful things. But if you don’t finish what you start, it’s like a building that never has a roof.

Dr. J. Robert Clinton teaches in the School of Intercultural Studies at Fuller Theological Seminary and has devoted vast amounts of time to researching the subject of lifelong leadership development. As part of his study, he identified about a thousand men and women in the Bible who were considered leaders: national leaders, Jewish leaders, church leaders, patriarchs, priests, kings, and so forth.

Many of these leaders were simply mentioned in the text without details, and you may be as surprised as I was to learn there are only forty-nine prominent leaders in Scripture whose lives were surveyed as a whole. We know how they started and how they finished.

Of those forty-nine, only thirty percent finished well. The other seventy percent fell short of God’s plan for their lives — a fact that should jolt us. Some leaders such as Samson and Eli stumbled at midlife. Others such as Noah, David, Jehoshaphat, and Hezekiah stumbled near the end.

But thank God for the thirty percent — for people like Joshua, Daniel, Peter, and Paul — who enjoyed walking with God in increasing intimacy throughout their days. They simply kept growing in the grace and knowledge of the Lord. They remained yielded to Him in all things. Like the tree planted in the courtyard of the Lord, they flourished and stayed fresh and green, bearing fruit whatever their age.

They are planted in the house of the LORD; they flourish in the courts of our God. They still bear fruit in old age; they are ever full of sap and green…”

Clearly, the greatest finisher in the Bible is Jesus. His entire life and ministry was motivated by a commitment to finish the work His Father gave Him to accomplish:

And when He came to His crucifixion, who can forget perhaps the most profound words in all of the Bible: “So when Jesus had received the sour wine, He said, ‘It is finished!’” (John 19:30)

There are countless barriers to finishing well. These five seem to dominate the literature on how to finish well.

These five barriers or challenges to finishing well could be a book in themselves. And, as I am planning a series of 32 ways to hear God’s voice for March and the start of April, I will just deal next time with the need to stay focused until you’re finished.