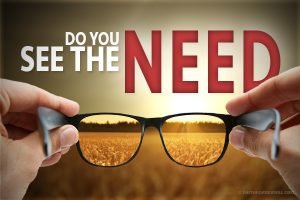 On a recent trip into another nation I noted that people of a particular ethnic group gathered together in a church that was being planted to minister to and attract those who belonged to that ethnic group. In attendance one evening were a few – very few – of those who were from that nation. The vast majority of people in attendance were from the ethnic group for whom the church was planted. All the leaders were from this ethnic group, all the worship team, and all those helping to bring a good worship experience to fruition.

I was an outsider – a “foreigner” – and not simply because I was a Canadian in a foreign nation. Even those who were citizens of that nation by birth would be considered “foreigners.” It would not have appeared to be a church for them.

Someone tells the story of an African American man who moved into an all-white community, not realizing how unwelcome he would be. On Sunday he went to a local church, but no one talked to him. He went for four straight weeks and then made an appointment with the pastor.

“I’ve been coming to church here, but I am having a real hard time connecting,” the man said. The pastor looked at him and said, “Well, maybe God doesn’t want you at this church.”

Four weeks later the guy ran into the pastor in a store. The pastor said, “Hey, I haven’t seen you. Did you pray about it?” What did God tell you?”

The guy said, “I prayed about it, and God told me, ‘Don’t worry about it. I’ve been trying to get in that church for years, and they won’t let me in either.”

The Bible is crystal clear that there is no male, no female, no ethnic differences, no “Jew nor Gentile,” no rich, no poor, but we are all one in Christ” (Galatians 3:28). Churches are sometimes not as clear about that.

People respond to the church when our compassion break down barriers.

In Sacramento, California a few years ago, white “Christian” supremacists firebombed three Jewish synagogues. Shortly after the attack a local pastor in the city was driving home after church and felt as though God whispered, “So-called Christians destroyed those synagogues. Real Christians ought to rebuild them.”

The next week the pastor announced that they were going to receive an offering on the following Sunday to rebuild these synagogues. Word of the offering spread across all that part of the state. People drove from all over Northern California to be a part of the services in order to give to that offering.

A Jewish couple drove for hours to sit through the service and hear for themselves what was happening. After the service, they came up to the pastor and said, “We drove three hours to see this. We have never heard of any Christian doing anything nice for a Jewish person – ever. We couldn’t believe this was actually happening. We had to come and see it for ourselves. We want to say thank you. We didn’t think Christians like this existed.”

The offering was huge – not enough to rebuild three buildings in the State of California, but it was a significant help to those Jewish leaders. Yet as soon as it was over, the pastor received one of the angriest letters from a Christian he had ever received. It said, in effect, “How dare you raise money for those people!”

Maybe that person would have said nothing if the church had compromised on helping others (compassion) and spent the money on new church carpet got ourselves.

All They Want Is My Money

It’s Not A Spectator Sport
Scroll to top