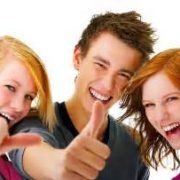 God is interested in young people. And, in my ministry I work with young people between the ages of 16 to 36 everywhere that I go. In fact, many of the team members now coming with me on overseas trips are in their late teens and early twenties. They are an amazing asset to the ministry and I enjoy working with them immensely.

Young people today are looking for acceptance in the Church. Often they don’t feel accepted because they are treated as “kids.” Teenagers today are much more mature and wise in the ways of the world than previous generations. They see life and engage with life at a level that previous generations never did and, in many ways, still don’t. They are looking for meaning, purpose, and something to invest their lives in. And, the Church needs to notice them, work to understand them, and integrate them into the life and finer of the Church in a meaningful and challenging way.

God has always interacted with young people … and there are many examples of this in the Scriptures. A few include:

Joseph (the guy with the coat of many colours) who received two prophetic visions or dreams of his future role for God. He became a leader in Egypt and saved his people from starvation.

Joshua was just a young man when first chosen by Moses to be discipled and mentored and eventually released to lead God’s people into the Promised Land after the death of Moses.

Daniel was used by God as a teenager in the Babylonian Empire as he interpreted the dreams of the ruler and as he received many visions regarding the end times – viewed now on the same level as John the apostle’s Book of Revelation.

Jeremiah was chosen before he was conceived in his mother’s womb and became a prophet while still very young – a teenager. God even had to remind him, “Do not say, I am only a youth…” (Jeremiah 1:7a)

Mary, the mother of Jesus, was in her middle teens when she became pregnant through the work of the Holy Spirit. She was used mightily by the Lord and was a vital part of the early Church.

Timothy was a young man discipled and mentored by Paul and he became an apostle and did some amazing work in the city of Ephesus and elsewhere in his early years of life.

The list could go on … but, my point is that God used and uses young people and we need to not neglect the amazing asset that young people are in the Church today.

Paul’s comment to Timothy bears repeating: “Let no one despise you for your youth, but set the believers an example in speech, in conduct, in love, in faith, in purity” (1 Timothy 4:12).