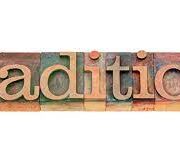 My family has a number of traditions. Good ones that remind us of our connection to each other and that often celebrate special occasional. With one daughter our tradition, on both Christmas and her birthday, is to go for lunch together and then to the local bookstore to add to her collection of books. We have been doing this for close to 30 years. It is a good tradition.

“For Moses said, ʻHonour your father and your mother,ʼ and, ʻWhoever insults his father or mother must be put to death.ʼ But you say that if anyone tells his father or mother, ʻWhatever help you would have received from me is corbanʼ (that is, a gift for God), then you no longer permit him to do anything for his father or mother. Thus you nullify the word of God by your tradition that you have handed down. And you do many things like this” (Mark 7:10-13 NET).

According t the scribal tradition that Jesus cites, someone could declare some or all of their property “Corban,” or “devoted to God,” and thereby release themselves of any obligation for the welfare of their parents. This “gift” did not have to be presented to the temple; they could use it for themselves in whatever way they chose. But the tradition set aside the biblical commands for children to honour their parents and take care of them in their old age.

Exodus 20:12 NET “Honour your father and your mother, that you may live a long time in the land the LORD your God is giving to you.”

Pastor Kent Hughes writes: “This amazing twisting of God’s Word by people who esteemed it as holy is especially revealing. Those who try to justify themselves by the Law end up modifying it in order to escape its authority.”

This is the danger of following human traditions rather than God’s heart as expressed through His Word, the Bible.

So we need to be careful that we don’t twist the truths of Scripture to justify a lifestyle that is actually contrary to the Kingdom lifestyle as set out in the Word of God. Be careful we don’t create and worship a god of our making. Let’s live the way Jesus commanded and follow His example of a life pleasing to God the Father.

There can be dangers in our man-made traditions. Be careful.