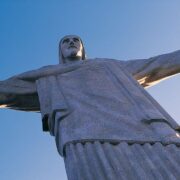 When ancient capital cities are excavated, it is rare to find statues of whatever god or king ruled there. Rome, for example, had hardly any statues of Caesar. Lots of statues of rulers were found in the colonies, far away from the capital.

Statues, or images, are a way of saying who is in charge. Whether it’s a huge statue or a face on a coin, the people know who their lord is when they see his face — even in a place he may never have visited. The statue set up in a colony one thousand miles from Rome was a way of saying “Caesar is lord.” It served as a reflection and reminder.

And so are we. We are living, breathing statues on earth as image-bearers of who is in charge. The problem, though, is that unlike statues, we can turn around and say no.

There are two significant consequences every time we make that decision: (1) we are no longer able to properly reflect him, and (2) we become like the idols we worship.

Think about the statues again in the colonies. If for some reason Rome “gave up” on a colony and let it be, and it no longer maintained or cleaned the statues, they would deteriorate and crumble.

Imagine Rome writing off a few statues and no longer taking care of them or “giving them over” to themselves. Those statues would quickly turn to rubble, piles of marble or stone. They would no longer properly represent Rome, the very source of their existence.

When we decide to worship something besides God, the same thing happens with us. We begin to lose the thing that makes us human. Our humanness begins to crumble. As image-bearers we have weight, but when we abdicate that responsibility, we lose that weight. Our glory begins to fall. We become ruins of what he created us to be.

Now, of course, we never fully lose that image while we are alive. No matter how hard you scratch, gnaw, or pull you can’t get the image of God off of you fully. There’s still glory residue no matter how hard you try. But the principle that is impossible to escape is we can’t be image neutral — we will reflect or become more and more like something or someone.

When heaven crashes down onto earth, it looks like we are reflecting and imaging God’s very own self in us. But to keep God from coming close , the only thing we have to do is worship something else as ultimate. Like the statues, this immediately cuts us off from the source and takes away our humanness.

It’s a scary question but one that should be asked: What would you be like if the thing that make you human — the image and likeness of God — was taken away from you?

In C.S. Lewis’s novel “The Great Divorce,” hell is painted as a picture of what happens when that image is fully removed. Heaven is inhabited by ‘solid people’ and hell is inhabited by ‘ghosts.’ There is a weight in heaven that is so real, so thick, it’s painful to the ghosts. In hell, they live hundreds of miles away from the nearest person. And hell is airy, thin, ghostlike. But heaven is dense, huge in proportion to hell. The bodies have weight, as if they were made for that place.

When the people in hell visit heaven, even the blades of grass are too dense to walk on. It’s painful to them because they have been dehumanized. By wanting to worship themselves and other things, the very thing that made them truly human (namely God’s reflected image in them) was scratched way. “Reality is harsh to the feet of shadows.” They don’t have that image in them. They don’t have the weight of glory. They are now subhuman. Sub-images.

And that the logical conclusion of idolatry. It’s colluding with evil to wipe away our humanness and to worship things that are not God. If we want to live our lives refusing the image of God in us, which is also the very thing that makes us human, hell becomes the place where God finally says okay. Which leads us to the second consequence: when God is no longer the image we orbit, then we become like whatever takes his place.