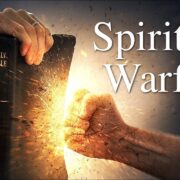 People often think of war as glamorous – until they or someone they know becomes a casualty. The same is true in the spiritual arena. Spiritual warfare seems to be a popular subject for movies, lectures, books, and preaching, but many believers are casualties of Satan’s schemes.

Make no mistake: whether they are aware of it or not, all Christians are engaged in a very real spiritual battle between two opposing kingdoms. And those least in the know are often the first casualties. Thankfully, Paul provides believers with a self-defence course in Ephesians 6, and Jesus equips us with all six dimensions of our spiritual armour. He is our truth, our righteousness, our peace, the object of our faith, the source of our salvation, and the living Word of God. When we “put on” Jesus Christ we are protected by the only person Satan has never defeated.

Romans 13:14 NET “Instead, put on the Lord Jesus Christ, and make no provision for the flesh to arouse its desires.”

Galatians 3:27 NET “For all of you who were baptized into Christ have clothed yourselves with Christ.”

Using the armour of a Roman soldier as a model, the apostle Paul describes how the Christian can stand strong in the midst of this ever-present, but unseen spiritual battle. Let’s read the Scripture we are referring to…

Ephesians 6:12-18 NET “For our struggle is not against flesh and blood, but against the rulers, against the powers, against the world rulers of this darkness, against the spiritual forces of evil in the heavens. For this reason, take up the full armour of God so that you may be able to stand your ground on the evil day, and having done everything, to stand. Stand firm therefore, by fastening the belt of truth around your waist, by putting on the breastplate of righteousness, by fitting your feet with the preparation that comes from the good news of peace, and in all of this, by taking up the shield of faith with which you can extinguish all the flaming arrows of the evil one. And take the helmet of salvation and the sword of the Spirit, which is the word of God. With every prayer and petition, pray at all times in the Spirit, and to this end be alert, with all perseverance and requests for all the saints.”

1> THE BELT OF TRUTH (6:14). The soldier’s belt served as the foundation of his armour, holding his sword and his breastplate. Because Satan is “the father of lies (John 8:44), he cannot stand against the truth. Jesus said, “I am the … truth” (John 14:6). Victory in spiritual warfare starts with truth.

2> THE BREASTPLATE OF RIGHTEOUSNESS (6:15). The breastplate guarded the heart — the source of the soldier’s life. In a similar way, righteousness protects the spiritual life of the Christian. Our righteousness comes not from ourselves but from Christ.

3> SHOES FOR YOUR FEET … given by the gospel of peace (6:15). The soldier’s heavy, armoured sandles gave him traction and security in the heat of the battle. So our peace with God through Jesus Christ gives us security in the face of Satan’s accusations.

Philippians 4:7 NET “And the peace of God that surpasses all understanding will guard your hearts and minds in Christ Jesus.”

4> THE SHIELD OF FAITH (6:16). The soldier’s leather-covered shield could be soaked in water to extinguish the flaming arrows of the enemy. Faith in God’s promises deflects and extinguishes the lies of Satan.

Proverbs 30:5 NET “Every word of God is purified; he is like a shield for those who take refuge in him.

1 John 5:4 NET “because everyone who has been fathered by God conquers the world.

This is the conquering power that has conquered the world: our faith.”

5> THE HELMET OF SALVATION (6:17). The armoured helmet protected the soldier’s brain. Since the primary battlefield in spiritual warfare is the Christian’s mind, assurance of salvation defeats the doubts Satan uses to attack us.

John 10:28 NET “I give them eternal life, and they will never perish; no one will snatch them from my hand.”

6> THE SWORD OF THE SPIRIT which is the Word of God (6:17). Paul noted only one offensive weapon, the soldier’s sword. For the Christians, the sword of the Word of God. Spiritual battles must be fought with spiritual weapons. God’s people fight not with arguments or violence but with truth; with righteousness; with the gospel of peace; with faith and salvation; and finally the Word of God. God promises that such weapons will defeat the enemy.

Thankfully, our spiritual armour is to be used in a war that has already been won. It is said of Napoleon Bonaparte that as he attempted to conquer all the kingdoms of the known world, he spread out a map on a table, pointed to a specific place, and said to his lieutenants, “Sirs, if it weren’t for that red spot, I could conquer the world.” The spot to which he pointed was the British Isles, the very nation that met Napoleon at Waterloo in Belgium and defeated him in league with a group of nations.

There is no doubt that when Satan talks with his minions about conquering the world, he says the same thing about the red hilltop of Calvary where Christ’s blood was spilled: “If it were not for that red spot, I could rule the world!”

But that red spot is what makes al the difference in our spiritual battle. We do not have to live in fear of the devil. We need enter only the spiritual battle to which we have been called, aware of its reality and its subtlety, and armed with the truth that the ultimate victory against Satan has already been achieved. Therefore, right now at this moment, “we are more than conquerors through Him who loved us “ (Romans 8:37).