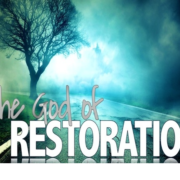 There are a number of television programs where we see construction people restoring an old house; flipping it for sale or because someone has bought it already and wanted it modernized and updated. Paul talks about “restoration” in his letter to the Galatians…

Galatians 6:1 NET “Brothers and sisters, if a person is discovered in some sin, you who are spiritual restore such a person in a spirit of gentleness. Pay close attention to yourselves, so that you are not tempted too.”

THE ACT OF RESTORATION. Although we are not to search for sin in the lives of fellow believers, we are to acknowledge it with humility when it becomes evident and reach out in love. Paul advises us to go to the one who has fallen and privately confront the fault with the goal of restoring them to wholeness (see Matthew 18 next paragraph). The restorer must be “spiritual” — someone who walks according to the Spirit (Galatians 5:16, 22-25) rather than functioning according to the flesh.

Matthew 18:15-17 NET “If your brother sins, go and show him his fault when the two of you are alone. If he listens to you, you have regained your brother. But if he does not listen, take one or two others with you, so that at the testimony of two or three witnesses every matter may be established. If he refuses to listen to them, tell it to the church. If he refuses to listen to the church, treat him like a Gentile or a tax collector.”

THE AIM OF RESTORATION. While the legalist seeks to exploit the fallen one, the loving believer is concerned for the fallen person’s good. “Restore” (from the Greek word used the describe the setting of a broken bone and the mending of broken nets) describes renewed harmony between quarrelling factions. When confronting another believer who is in sin, we should aim for repentance from sin and restored relationships.

THE ATTITUDE OF RESTORATION. The Spirit-led believer approaches restoration in a spirit of meekness and love. Martin Luther describes this attitude well: “Brethren … if any man be overtaken with a fault, do not aggravate his grief, do not scold him, do not condemn him, but lift him up and gently restore his faith. If you see a brother despondent over a sin he has committed, run up to him, reach out your hand to him, comfort him with the gospel and embrace him like a mother.”

Finally, Paul urges the spiritual restorer, “Keep watch on yourself” — we must be aware that we could just as easily fall into the same temptation ourselves.

Proverbs 16:18 NET “Pride goes before destruction, and a haughty spirit before a fall.”

1 Corinthians 10:12 NET “So let the one who thinks he is standing be careful that he does not fall.”

The illustration reminds us that no one is free from the pitfalls of sin.

James 3:2 NET “For we all stumble in many ways. If someone does not stumble in what he says, he is a perfect individual, able to control the entire body as well.”

Thankfully, because of Christ, no believer is beyond the possibility of restoration, either.