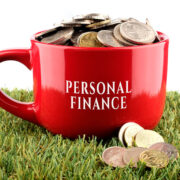 Most of us have made some dumb mistakes with money…

I did…and I wanted to share them with you…

#1 – I Did Not Place Jesus First In My Finances OR…in other words…I did not tithe.

#2 – I treated tithing as the finish line.

In the summer of 1977 I head a preacher say: “We all know that Scripture says to tithe…what I want to ask tonight is what are you doing with the other 90% to advance His Kingdom; after all, He does own it all!”

That statement hit me in the face like a ton of bricks…Psalm 24:1 became more real to me than ever before…and that night I surrendered the other 90% to Jesus!

Tithing isn’t the finish line…it’s the starting point…God has called us to be generous givers – HE IS!!! (2 Corinthians 9:15)

I was earning $5,600.00 a year and had my first of six children. Debt kept piling up. Credit cards (and there were a few) were maxed out.

I felt trapped–heck, I was trapped…and I had just about given up hope until I heard God say that if I would continue to tithe and give over and above my tithe He would take care of things. So, I did just that. 12 months later I had paid a $6,000.00 loan off at my local bank and my credit cards were all caught up. I paid more debt off than I earned in the year. Supernatural, yes! Impossible? No!

I remember my first credit card…after getting it I stopped at a store and purchased something I really didn’t need. It was $300…and when I got the bill in the mail the next month the payment was ONLY $15!!! (I didn’t know what 19% interest meant!) It was the beginning of a PAINFUL lesson for me–making the minimum payment is NOT a great financial plan!

Within four years I was carrying maxed out balances on around seven credit cards and “successfully” making the minimum payments every month…which was KILLING ME financially. I reasoned that if I continued to make the minimum payments that I would one day be out of debt…which WAS true…but “that day” would have been in the year 2900 at the rate I was going!

Don’t roll your eyes…some of you do this! I would get a “convenient” credit card offer in the mail and it would say, “transfer your balances today and get no interest for six months.” What the offer didn’t tell you is that the interest rate was an arm and a leg after that six months.

I always told myself that I could pay off the balance within six months–WHICH NEVER HAPPENED! I realized then that Proverbs 22:7 was/is true…in just four years of having a credit card (which was only going to be used in case of an “emergency”) I had DISCOVERED that the key to my financial freedom wasn’t in obtaining another credit card but rather to live within my means and don’t buy anything on credit unless I was able to pay it off completely when the credit card statement came in each month.

#6 – STUPID car decisions.
I used to be the guy who said, “I will always have a car payment.”

Today I own my cars…they do not own me…and that is a very freeing feeling. Most people I have talked to who are strapped financially could free themselves up so much if they would just sell their car…but their desire for status rather than financial freedom will prevent them from it most of the time.

#7 – Not having an emergency fund.

One of the things that I have just accomplished is to have an emergency fund. Emergencies are going to happen, the car is going to break down, the kids are going to get sick, the tire is going to go flat…and that if money is set aside for these emergencies then they are less worrisome when they take place.

Just sharing what I have learned over the years …