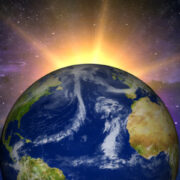 If you want a strange verse about what will happen at the end of time, read Isaiah 11:9: “For the earth shall be full of the knowledge of the Lord as the waters cover the sea.”

The word knowledge used there is a Hebrew word that can mean “intimate.” It’s not knowledge of mathematics or science; it’s knowledge of intimacy. If you’re married, you know your spouse.

This is also the verse that says at the end of time, when everything is fully restored, God’s weight, glory, and knowledge will cover the earth the way the waters cover the sea.

The verse sounds cute and poetic at first, but if you think about it, it sounds strange.

How does water cover the sea? Water doesn’t just cover the sea; water is the sea. They are so interwoven that they are basically the same because sea is a type of water.

What God is saying is that when He finally reaches His goal and is fully dwelling with His people, in full intimacy, and sin, death, and all evil are gone, His glory and beauty will be so deeply covering the earth and our lives that they won’t ever be able to be separated again. Similar to the water and the sea, His glory and the earth will be married fully as one, never to be separated again.

Is that the trajectory your life is on?

The cool part about the Bible is we can read the ending. And every time I do, I have to ask myself, is my life going in that direction? Toward closer intimacy with God? Toward beauty? Toward Him dwelling more fully with me? Am I allowing Him to take up residence in my life in all things? He’s coming down and being vulnerable; am I reciprocating and dancing back with Him in the music of eternity?

The incredible things about this is once you step into it, it never ends. Once we start following Jesus, every day of our entire lives is about us getting closer and closer to our Creator. This isn’t something you achieve or reach the finish line on.

Every day is a battle, and some days are better than others, but it’s about resolving to put our moment-by-moment lives on that path. What can you do to put yourself on the right path? What little thing can you do today to put you on the right trajectory?

After all, you already know the ending.

The Gospel of John, while the Jewish people are still waiting for the glory of Yahweh to return to His temple, begins with the word, “In the beginning..”

Any faithful Jew would have immediately recognized the book’s introduction as the same introduction to Genesis — the book of beginnings and creation, when God sealed the earth with His presence. John is invoking the Genesis language to get his readers ready for a new story about another beginning, or a new beginning.

Skip down a few verses from that first verse and we see one of our most famous Christmas verses. In the beginning there is this “Word” being, John says. And this Word being is somehow like God, with God, and is God. As a believer you’ve probably quoted John 1:14 at least once…

“And the Word became flesh and dwelt among us.”

But the Greek word translated as “dwelt” in that verse is eskenosen, which can literally mean “to fix a tent.”

John is saying loud and clear that Jesus Himself is pitching His tent (that is, His holy tabernacle) among us. His body is now the place where Heaven and earth crash together. The temple system has reached its fulfillment and was always a signpost pointing to the great temple Jesus. The glory of God has returned to His temple, and it looks like a Jewish rabbi in Judea. How strange is that?

So John, in just a few verses, is purposely saying things to draw strong echos. Jesus is the new genesis, the beginning of a new creation; and God Himself is pitching His tent with its — to be with His people.

What if we believe that?

Growing up I believed that Jesus was very far away. That He was standing up in Heaven with His arms crossed waiting for me to get it right. Or even if He did show me grace, I imagined Him rolling His eyes, saying, “Ugh, not the same mistake for the twenty thousandth time.”

But John’s words say otherwise. God really does want to dwell with me. He really wants to pitch His tent in my life. And when I continually fall, He says, “Hey, I’m in this for the long haul.” He is God with us, Emmanuel.

In the Gospels, we see Jesus as the walking temple. God in flesh. The dwelling place of God now walking among us. But many of the Jews missed Him. They wanted power more than they wanted love and justice and mercy.

You would think God would have reached His tolerance limit and gotten rid of us all. Can you see all the pain and grief from God’s point of view? Just think of a friend or sibling who’s making poor decisions and choices, and how it literally hurts you. Now multiply that by billions, over thousands of years, and that’s the pain we’ve caused God. He could have stayed high and lofty, but he knows love isn’t possible without vulnerability.

So instead of blowing us off the planet after hundreds of years of rebellion, He resurrects Himself from the grave and then sends His very Spirit to dwell in us! It doesn’t get much more vulnerable than that. We can grieve the very Spirit of God because we are now His dwelling place, His temple.

God is forever taking one more step toward us, and every time He reveals Himself it’s in a less guarded way. He wants to make Himself known, and to do that He makes Himself vulnerable.

The other gods seem high, mighty, and untouchable; they leave us to move first, to initiate, to appease them.

And He relentlessly pursues and chases. He shows that sooner or later, love will woo a human heart. Might we lean back into Him?

God in the temple, God in Jesus, and now God in us. And the Scriptures keep going all the way to Revelation 21, where it says we don’t need a temple because God is our very dwelling place.

The conclusion next time…

In Exodus (second book of the Bible) God tells us that He “will dwell among the people of Israel and will be their God” (Exodus 29:45). Millennia later, John, the writer of Revelation, tells us he “heard a loud voice from the throne saying, “Behold, the dwelling place of God is with man. He will dwell with them, and they will be His people, and God Himself will be with them as their God” (Revelation 21:3). This is a major theme throughout Scripture (Exodus 25:8; Leviticus 26:12; Zechariah 2:10; 2 Corinthians 6:16; Revelation 21:3).

So one of the overarching themes in Scripture — from the very beginning to the very end — isn’t to “get people saved” but for God to dwell down here with His people. We are so concerned about going up to Heaven, but God is concerned with bringing Heaven down to earth. Revelation, chapter 22 even says the new heavens and the new earth won’t need a temple because God will be our dwelling place (think back to Genesis!). We are working so hard to get out of this place, while God is working hard to recreate and come down to this place.

Because dwelling is God’s goal, He provided instructions for building a tabernacle (think portable temple) when He pulled the Israelites out of Egypt. God wanted to be in the midst of the Israelites. They were moving, so He would move with them.

Then later down the road, God gave kings David and Solomon permission and instructions for building a permanent dwelling place for him (1 Kings 6:1; 1 Chronicles 22).

The temple Solomon built, with God’s glory in the Holy of Holies, came to represent the Israelites’ national and personal identities. It was the center of everything: Jerusalem literally was built up around it, and the people organized their lives according to its annual festivals. But Israel began to worship other gods. Maybe it was because they got tired of making frequent trips to Jerusalem, or maybe they just wanted perceived control over their own lives. Since the fall in Genesis 3, it was almost more natural to worship false gods than the real God.

The Israelites liked gods that were controllable, and the Creator God wasn’t. They began to make a mockery of the temple system. They wanted to pursue other gods around them, when the true God Yahweh was right in their midst.There was one point where some even began following the god Molech, who called for child sacrifice.

As judgment, and maybe as a sign to wake them up, God send the leaders of Jerusalem into exile in Babylon. They were enslaved to people who worshipped Marduk. The very presence of God was seen leaving the temple right before this judgment. And then the temple got destroyed (Jeremiah 52).

Can you imagine how this must have felt? How would you feel if you home and the city or town you live in was totally destroyed? That’s about as close as you can get to imagining what the Israelites felt when the temple complex was razed by the Babylonian emperor Nebuchadnezzar. They sing,

there we sat down and wept,

when we remembered Zion.

On the willows there

we hung up our lyres.

For there our captors

required of us songs,

and our tormentors, mirth, saying,

“Sing us one of the songs of Zion!”

A generation later, after Babylonia has been overthrown by Persia, some of the Jews are allowed to make their way back to Jerusalem and begin rebuilding the temple. But it’s clear Got isn’t there anymore. The “Shekinah glory,” as it’s called, never seems to return.

From this period until the last sentence of the Old Testament, the Israelites are left wondering when God will return to dwell with them. He promised he’d come back and be with His people. His very presence in their midst.

Can you imagine the hundreds of years of longing, aching, and praying for this to happen? With every year that passed, the expectation that God would do a new thing, a big thing, a monumental thing got larger and larger.

And then it happens. Just not the way they expected.