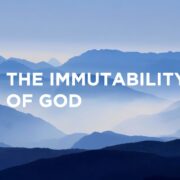 The Christian doctrine of immutability says that God is unchanging.

Psalm 102:26-27 ESV “They will perish, but you will remain; they will all wear out like a garment. You will change them like a robe, and they will pass away, but you are the same, and your years have no end.”

Hebrews 13:8 states that Jesus — God in human flesh — is immutable. “Jesus Christ is the same yesterday and today and forever” (ESV).

Yet three passages in the Old Testament state that God relented or changed His mind about something He did or was going to do. Take the time to read these verses slowly…

Genesis 6:7 NET “So the LORD said, “I will wipe humankind, whom I have created, from the face of the earth – everything from humankind to animals, including creatures that move on the ground and birds of the air, for I regret that I have made them.”

1 Samuel 15:11 NET “I regret that I have made Saul king, for he has turned away from me and has not done what I told him to do.”

But Saul remains king for more than a decade in spite of God’s stated regret.

Jonah 3:10 NET “When God saw their actions – they turned from their evil way of living! – God relented concerning the judgment he had threatened them with and he did not destroy them.”

And the city and people of Nineveh continued on for several hundred years before permanently turning away from the Lord and thus were destroyed.

From our perspective, it certainly appears that God changed, but when we see God’s response from His perspective, we find the consistency that we expect of Him and His Word. His “unchangingness.” Here’s how we can understand these seeming contradictions:

God’s change is an accommodation. When God uses language such as “I am sorry that I made man,” He is doing it as an accommodation to us, stooping to communicate in the only terms we understand: the language of “human.” He is expressing a feeling in human terms that do not express exactly what He is feeling and thinking.

God’s change is an affirmation. God’s “repentance” is not a change in His will; it is His willingness to allow us to change. While it is true that God knows everything in advance, it is a mistake to infer from this that He is incapable of emotion or reaction to His creatures. The Scriptures show that He is a God who cares deeply for those made in His image, and He acts according to that love. His love is “never changing” or immutable.

God’s change is an application. God’s immutability does not mean He is immobile. He is consistently pursuing a righteous course, and thus He adapts His response to people’s moral changes. God’s unchanging holiness requires His treatment of the wicked to differ from that of the righteous. When the righteous turn wicked — or the wicked turn righteous — the way He treats them must change. God must deal with each of us according to the way we are currently living — and particularly according to the ways we change.But the way He treats the wicked and the righteous never changes. It is immutable.