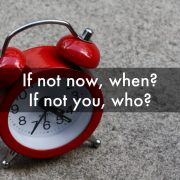 I was thinking of making some changes in the way I live life. Some small. Some of major proportions. These were life changes with respect to how I express myself – clothing choices, where I live, how I live. Also under consideration was a change in what I am doing for a living – how I minister, where I minister, the nature of the ministry. And, of course, like you I can think of so many reasons why I should not make the changes or, at least, not make them now.

This was especially true in regard to changing the focus of my ministry. Doing less travel and more writing so as to complete the books that have been prophetically spoken about numerous times in the past decade.

As I was thinking about all this I heard God says, “If not you, then who? If not now, then when?” And, I was immediately thinking – later, much later.

I then read the following ay Jennifer Reed:

“ Can there be a more insidious word? Later, as in, ‘I’’ll do it later.’ Or, ‘Later, I’ll have time to write that book that been on my mind  for the past five years.’ Or, ‘I know I need to straighten out my finances … I’ll do it later.’

‘Later’ is one of those dream-killers, one of the countless obstacles we put up to derail our chances of success. The diet that starts ‘tomorrow,’ the job hunt that starts ‘eventually,’ the pursuit of the life dream that begins ‘someday’ combine with other self-imposed roadblocks and lock us on autopilot.

Why do we do this to ourselves, anyway? Why don’t we take action now? Let’s face it: The familiar is easy; the uncharted path is lined with uncertainties.”

When it comes to change and grasping something new it seems that there is always a reason why we will not, can not, should not, could not, grab hold of the opportunity that God seems to be speaking to us about. We think that it can wait. I mean why rush into things. However, that too is just an excuse.

It seems to be that we are lacking a sense of urgency. A sense of “redeem the time” as the Bible states. A lack of a sense of adventure which prevents us, anchors us, to what we think is safe, secure, and comfortable but often seriously is not. However, we don’t know that, so we hang on to the comfortable thinking we are safe. And, hang on today thinking there are endless tomorrows still to come in our lives.

But, as believers, we were born again into a new life as a new creature. And within this new life we are given is a radical nature that craves adventure and does not want to settle for what is. In fact, if that sense of adventure is ignored and we settle for being safe we become seriously self-centered, selfish, and, worse still, boring. And, I think that most Christians are boring. Have you listen to what they talk about? Right, themselves.

What about you? Are you waiting for something or holding on to something that is preventing you from just “doing it now?”