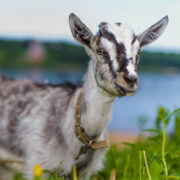 There is an ancient Israelite and Jewish holiday called Yom Kippur, or the “Day of Atonement.” Back when the temple still existed, the priest sacrificed one goat on an altar and sent a second goat into the wilderness.

The second goat has always fascinated me. According to the Torah, the high priest was commanded to put his hands on the head of the goat, confess Israel’s sins, and transfer them to the goat. When that was done, he would send the goat out into the wilderness never to be seen again. This is where we get the term scapegoat.

But what is fascinating is Jesus wrapped up all these traditions in Himself, and that scapegoat was only a shadow. The real things is Jesus.

We are called to take the deepest, darkest, hardest sins of ours — ones we have committed and ones that have been done against us — and reach out our hands and put them on Jesus. On the cross Jesus was both the sacrifice and the scapegoat. He took our sins into the grave, as the goat took them into the wilderness.

The beautiful part is, once we transfer them to Jesus, He leaves them in the grace, resurrects, and shuts the door to death behind Him. We have new life now. We have peace and forgiveness. We are new creations.

Have you had that moment? Have you leaned in and put that weight on Jesus? Are you tired yet? Tired of the shame, guilt, and game we have to play to keep it all together? He wants it, He takes it, and He defeats it.

And notice, too, that when Jesus comes out the other side, in the resurrection, His wounds are no longer wounds.

They have been healed. While many of us see scars as a weakness, if Jesus has scars after the resurrection, then maybe they’re not. Maybe scars make us truly human. They show we’ve lived. They tell our story. Without our scars we might not be the same people, but praise God they are no longer wounds.

Eight days later, Jesus and Thomas finally see each other. Jesus doesn’t rebuke Thomas and tell him to believe harder. He doesn’t tell him to read more apologetics books. He doesn’t say, “Just have faith.” He says, “Put your finger here and see My hands; and put out your hand, and place it in My side. Do not disbelieve, but believe.”

The answer to Thomas’s doubt was Jesus telling Thomas to reach out and touch Him. To feel His scars.

It’s almost as if Jesus’ scars were what proved His humanity. Made Him real in that moment.

Many times we miss Jesus because we try to muster intellectual rigour or arguments in our darkest times, but Jesus simply says, “Touch Me.” There’s intimacy there. There’s Jesus saying in our pain, “I know. Look at My scars.” He had experienced death, but He had also experienced resurrection. 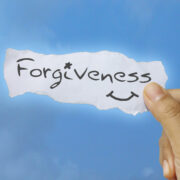 I was walking my dog the other day and stopped to chat with a neighbour who lives a few houses down the street from mine. He was shovelling snow – something a lot of us are doing a lot of this winter. We have a new city by-law that requires we shovel the snow on the city sidewalks that border our property. It has always been a suggestion and a nice courtesy to those who walk in the winter. Now it is the law and so many more people are clearing the sidewalks. Dog owners greatly appreciate the clearer sidewalks.

We were talking about one of his neighbours who apparently is not aware of the new by-law or chooses to ignore it. He immediately responded that he would be happy to clear his part as well if he had not been such a “bad neighbour” this past summer. It seems when he was cutting grass his mower spun a stone out with the grass clippings and it damaged his car. When brought to his attention he did nothing about it – not even an apology. It was obvious that my new friend had not forgiven his neighbour and would therefore not be helping to keep his portion of the city sidewalks clear.

In Matthew 18 we read about Peter who was apparently struggling with a neighbour or a family member along the same lines of needing to forgive.

Matthew 18:21-22 NET “Then Peter came to him and said, ‘Lord, how many times must I forgive my brother who sins against me? As many as seven times?’ Jesus said to him, ‘Not seven times, I tell you, but seventy-seven times!’”

Rabbinic tradition taught that a brother could be forgiven three times for the same offence, but not four times. Peter, trying to be a better than a superior Law keeper, doubled that and added one – seven times. He did not anticipate Jesus’ response, which is not a congratulations but a correction. Whether the phrase should be rendered seventy times seven or seventy-seven is irrelevant; Jesus teaches us that believers in Christ have been forgiven more than they will ever be asked to forgive. They must cultivate a spirit of forgiveness, not a habit of counting offences.

Matthew 6:14 adds a bit around the edges to this truth…

So our forgiveness is conditional upon our forgiving others and not becoming offended.

Mark, the author of another Gospel, adds his thoughts on the matter connecting the whole area of forgiveness to our personal prayer lives…

“Whenever you stand praying, if you have anything against anyone, forgive him, so that your Father in heaven will also forgive you your sins.” (Mark 11:25 NET)

Paul, the apostle, in writing to the believers in Colossae writes:

“… bearing with one another and forgiving one another, if someone happens to have a complaint against anyone else. Just as the Lord has forgiven you, so you also forgive others.” (Colossians 3:13 NET)

And, of course, the very familiar Lord’s Prayer states…

“So pray this way: Our Father in heaven, may your name be honoured, may your kingdom come, may your will be done on earth as it is in heaven. Give us today our daily bread, and forgive us our debts, as we ourselves have forgiven our debtors. And do not lead us into temptation, but deliver us from the evil one. For if you forgive others their sins, your heavenly Father will also forgive you. But if you do not forgive others, your Father will not forgive you your sins.”

That is certainly stated in no uncertain terms. Forgiveness is a very important aspect of our walk as believers. We need to deal with our issues and learn to forgive immediately and totally. Otherwise, we are simply poisoning ourselves and hindering our relation hship with Jesus and others.

Just some of my thoughts after seeing how entangled my neighbour was because of the anger and unforgiveness he was harbouring towards his next door neighbour.