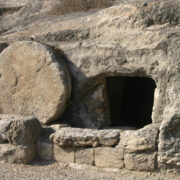 We have looked at four of seven “proofs” of the resurrection:

5> THE SHROUD. In the most literal sense, the grave was not empty because the grave clothes were still there.

When John leaned over and looked into the tomb, he saw something so startling that he did not enter: where the body of Jesus had lain were His grave clothes, in the form of a body but slightly caved in and empty. John never got over the sight. The first thing that stuck in the minds of the disciples was not the empty tomb but the empty grave clothes — undisturbed in their form and position.

This sign of Easter — this proof of the Resurrection — eliminates the theory that the body was stolen — no thief would have left the linen grave clothes there. It also eliminates the theory that Jesus resuscitated Himself and walked out of the grave. How could He leave the grave clothes in the shape of His body in the tomb? One glance at Jesus’ burial clothes proved the reality of the Resurrection.

6> THE SCARS. Moving beyond that first day, Jesus appeared to the disciples when they were gathered behind closed doors and “showed them His hands and His side” (John 20:20). When Thomas, who had been absent, heard about Jesus’ appearance, he said that he would not believe unless he could see Jesus and His scars for himself. Jesus graciously accommodated Thomas’ desire and returned to the disciples the following Sunday. Addressing His doubting disciple specifically, Jesus said, “Put your finger here, and see My hands; and put out your hand, and place it in My side” (John 20:27). The scars so convinced Thomas and the others that they believed and were transformed.

7> THE SIGHTINGS. In 1 Corinthians 15, Paul summarizes Jesus’ appearances after His resurrection. The New Testament records that He showed Himself alive to certain individuals (Mary Magdalene, Peter, and James), to the disciples both without and with Thomas, and on one occasion to more than 500 of the brothers and sisters at the same time. Many of these people would still be alive when Paul wrote his words in AD 54. One writer has noticed that if you brought all of these witnesses into a courtroom and gave each one only six minutes to testify, you would still have over 50 hours of testimony to the reality of the risen Christ. This was not a case where one or two people merely observed a fleeting, shadowy figure. Instead there were multiple appearances to numerous people, with several of those appearances confirmed in more than one Gospel account.

Frank Morison, a writer who held the opinion that the Resurrection was nothing but a fairy-tale ending that spoiled the matchless story of Jesus, felt that he owed it to himself and others to write a book that would present the truth about Jesus and dispel the mythical story of the Resurrection. But once he studied the facts, the evidence compelled him to conclude that Jesus actually did rise from the dead. Morison wrote his book — but not the one he had planned. His book is called “Who Moved the Stone?” The first chapter is called “The Book That Refused to Be Written.”

Anyone who really examines the evidence for the Resurrection of Jesus Christ will discover that the biblical record teaches the truth of the Resurrection beyond any reasonable doubt. There is no explanation for the empty tomb except that God raised Jesus from the dead!

Last time we looked at the first two of seven “proofs” of the resurrection:

3> THE STONE. In Mark’s account of the Resurrection, we are told that the stone placed in front – at the entrance – to Jesus’ tomb was extremely large.

Mark 16:4 NET “But when they looked up, they saw that the stone, which was very large, had been rolled back.”

Some manuscripts describe it as a “stone which twenty men could not roll away.” Jesus was buried in a new tomb that had been hewn out of solid rock. Usually Jewish tombs had an entrance four and a half to five feet in height. We are told that when Peter and John ran to the tomb, John had to stoop to look in.

John 20:5 NET “He bent down and saw the strips of linen cloth lying there, but he did not go in.”

He had to lean over because the entrance was no more than five feet high.

Several studies have tried to determine how big a stone would be if it covered an opening measuring four and a half to five feet. Conservative estimates are that the stone would have weighed one and a half to two tons. On that Sunday morning, the first thing that impressed Mary Magdalene was that the stone was not in place. Not only was the stone no longer in front of the tomb, it had been removed out of the groove and was some distance from where it would have been had it been moved in the conventional way. In his Gospel, John uses a word that means “to pick something up and carry it away.”

John 20:1 “Now very early on the first day of the week, while it was still dark, Mary Magdalene came to the tomb and saw that the stone had been moved away from the entrance.”

4> THE SEPULCHRE. Everyone agrees that Jesus’ tomb was empty — even those who deny the Gospel accounts. The accounts of the Resurrection would never have been believed if people had found the body of Jesus still in the tomb. So the question has always been, what became of it? Would the authorities deliberately removed the body to prevent the disciples from claiming that He had risen? This is difficult to believe — in that case the authorities would have immediately produced the body to shut down the new movement and silence the apostles’ proclamation that “He Is Risen!”

Did the disciples steal the body as part of a hoax, an attempt to deceive people into believing that He had risen? This theory is impossible and also does not hold water. The disciples were prepared to suffer and die for the Gospel, and people do not become martyrs for something that they know is a lie. Also, the disciples did not then travel to Rome or Athens to preach that Christ was raised from the dead; they went right back to Jerusalem, the scene of the so-called crime! If they were reporting falsely, their message could have been disproved. Word of the Resurrection could not have been sustained in Jerusalem for a single day if the empty tomb was not an established fact.

Fifth and six proofs next time

Easter this year is April 17th and as a teacher and preacher of God’s Word I am always thinking ahead as I write material to preach, teach, and post. And as a believer who is sharing his faith every opportunity I get I find myself having to “defend” the fact that I actually and truly believe that Jesus was raised bodily from the grave and is alive. So, I thought I would share the seven biblical reasons I believe in the resurrection of Jesus other than I encountered Him personally and in the flesh the night I was saved, November 9, 1976.

The real message of Easter is the empty tomb. As the angel said:

Matthew 28:5-10 NET “But the angel said to the women, “Do not be afraid; I know that you are looking for Jesus, who was crucified. He is not here, for he has been raised, just as he said. Come and see the place where he was lying. Then go quickly and tell his disciples, ʻHe has been raised from the dead. He is going ahead of you into Galilee. You will see him there.ʼ Listen, I have told you!” So they left the tomb quickly, with fear and great joy, and ran to tell his disciples. But Jesus met them, saying, “Greetings!” They came to him, held on to his feet and worshiped him. Then Jesus said to them, “Do not be afraid. Go and tell my brothers to go to Galilee. They will see me there.”

The battle over the resurrection of Jesus Christ has always been fierce. The empty tomb, as an enduring symbol of the Resurrection, is the ultimate proof of Jesus’ claim to be God. So how do we know the Resurrection actually happened?

1> THE SOLDIERS. Jewish officials panicked because thousands were following Christ. They heard Jesus predict that He would rise on the third day, and so when His body was placed in a tomb, they had to make sure He was put away for good! So the chief priests and Pharisees gathered and asked Pilate (the Roman ruler) to “order the tomb to be made secure until the third day, lest His disciples go and steal Him away and tell the people, ‘He has risen from the dead.’” Pilate agreed, so they secured the tomb, in part by “setting a guard”

Matthew 27:63-66 NET ““Sir, we remember that while that deceiver was still alive he said, ʻAfter three days I will rise again.ʼ So give orders to secure the tomb until the third day. Otherwise his disciples may come and steal his body and say to the people, ʻHe has been raised from the dead,ʼ and the last deception will be worse than the first.” Pilate said to them, “Take a guard of soldiers. Go and make it as secure as you can.” So they went with the soldiers of the guard and made the tomb secure by sealing the stone.”

A Roman guard unit consisted of 4 to 16 men. Each soldier was trained to protect six feet of ground. Normally, four men were stationed immediately in front of the object they were to protect, while the other 12 slept in a semicircle in front of these four. Every four hours, a new unit of four was awakened, and those who had been keeping watch went to sleep. This routine went on around the clock. To steal what these guards were protecting, thieves would first have to walk over those who were asleep and then deal with the guards who were not.

Although the idea that the disciples stole the body of Jesus might explain the missing corpse, the idea is more absurd than any other theory put forth to explain away the Resurrection.

2> THE SEAL. Matthew records that the soldiers “went and made the tomb secure by sealing the stone” (Matthew 27:66). The seal could be placed on the stone only in the presence of the Roman guards who were in charge. The procedure was designed to prevent anyone from tampering with the contents of the grave. After the guards inspected the tomb to be sure the body was where it should be they rolled the stone in place and a cord was stretched across the rock. This was fastened at either end with sealing clay. Then the clay packs were stamped with the official signet of the Roman governor. But on Resurrection morning the seal was broken because the stone had been removed from the opening of the tomb while the soldiers were still there guarding the sealed tomb.

Matthew 28:1-4 NET “Now after the Sabbath, at dawn on the first day of the week, Mary Magdalene and the other Mary went to look at the tomb. Suddenly there was a severe earthquake, for an angel of the Lord descending from heaven came and rolled away the stone and sat on it. His appearance was like lightning, and his clothes were white as snow. The guards were shaken and became like dead men because they were so afraid of him.”