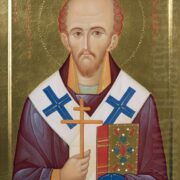 I have been studying the topic: the love of God. Amazing study. As I looked at the verse “nothing can separate us from the love of God” (Romans 8:35-39) I ran across an amazing story.

A fourth-century Archbishop of Constantinople was such an eloquent preacher that, after his death, the Greek word Chrysostomos (“golden mouthed”) was added to his given name, John. History has since known him as John Chrysostom. He did not hesitate to point out abuses of power wherever he found them, and his outspoken oratory got him in trouble with both the church and the Roman Empire. On one such occasion, he was brought before the Roman Emperor. Tradition tells us that the emperor fixed Chrysostom with a glare and said: “I will banish you if you do not give up your faith.”

“You can banish me,” Chrysostom replied, “for the whole would is my Father’s house.”

“But I will put you to death.”

“Then I will take away all your material possessions.”

“No, you can’t. My treasure is in heaven along with my heart.”

“But I can drive you away from man. You will have no friends left.”

“No, you can’t make me friendless. I have a Friend in heaven from whom you can’t separate me. I defy all your attempts to silence me. There is nothing you can do to hurt me.”

Romans 8:35-39 “Who shall separate us from the love of Christ? Shall tribulation, or distress, or persecution, or famine, or nakedness, or danger, or sword? As it is written, “For your sake we are being killed all the day long; we are regarded as sheep to be slaughtered.” No, in all these things we are more than conquerors through him who loved us. For I am sure that neither death nor life, nor angels nor rulers, nor things present nor things to come, nor powers, nor height nor depth, nor anything else in all creation, will be able to separate us from the love of God in Christ Jesus our Lord.”