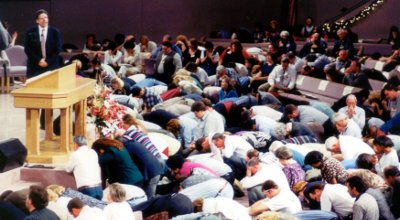 The Brownsville Assembly of God in Florida’s Panhandle was home to the Brownsville Revival for six years. It saw countless healings and miracles in the mid- to late-1990s, but the church is currently struggling to survive as it is entangled in a large debt.

According to the Associated Press, the Brownsville Revival, also known as the Pensacola Outpouring, drew as many as 5,500 people a night for six years; estimates put the total between 2.5 million and 4.5 million people. The church saw donations pour in as it added staff, built an enormous new sanctuary and opened a school for preachers.

A decade removed from the largest Pentecostal outpouring in U.S. history, the church is facing financial ruin. It incurred an $11.5 million debt after the out-of-town crowds and its former pastor moved on.

“Every Monday I find out what the (Sunday) offering was and we decide what we can pay this week,” the Rev. Evon Horton, Brownsville’s current pastor, told AP. “The good news is last week we paid our mortgage. The bad news is it drained our bank accounts.”

The church has been making cuts wherever it can. It has slashed millions off its debt by selling property and trimming expenses, and it’s in the midst of raising funds to pay off the remaining $6.5 million.

The paid staff of 50 is now down to six, and the weekly newsletter is printed monthly instead. Between 800 to 1,000 worshippers total attend two Sunday services, leaving most of the 2,200 seats in the sanctuary empty. Another sanctuary, which seats 2,600 and was built just for the revival, is now used for a gym, community classes and storage.

Horton told AP it’s a blessing from God that the church has survived this long. “It’s the hardest thing I’ve ever dealt with in 30 years of ministry,” he said.

The church’s former pastor, the Rev. John Kilpatrick, resigned in October 2003, almost three years after the revival died down to its last nightly service. He now operates a bustling church and the Bay of the Holy Spirit Revival ministry based in Daphne, Ala.

According to AP, Kilpatrick said Brownsville was never the wealthy church many thought it was during the revival years, so the only way to pay for growth was by taking out loans. He said the church fell into even deeper debt after he resigned and membership fell.

“I resigned (from) the church, and I never would have left if I knew the struggles it was going to have,” he said.

During the revival years, word spread quickly about the miracles and conversions happening at the church, so it started buying nearby housing and demolishing them to make room for parking. The AP reports Brownsville took in millions in donations and revenue, but used mortgages to expand rather than cash.

“You’d think that money was just flowing into the place,” Kilpatrick said. “But it wasn’t.”

The pastor says he cannot recall what the financial situation of the church was back then, but he’s saddened by their current situation.

“Many times when a pastor leaves churches begin to get into a struggle,” he said. “That’s what happened at Brownsville. I just hate for them that it happened.”

Brownsville’s remaining parishioners are working hard to pay off the church’s debt, while also ministering to the impoverished community that surrounds them.

“This revival touched the world but not this community,” Horton said.

The church is trying to raise $7 million through a fundraising effort Horton says came to him in a dream from God. They are asking people to give $1,000 each for debt relief, and donors’ names will be engraved in a “walk of faith” around the old sanctuary.

“We can be debt-free if just 7,000 of the millions of people who attended the revival help out,” Horton said.

Although the church is working hard to say goodbye to its debt, it’s also trying to move forward with no bitterness.

“We need to stop worrying about the debt, and we’ve kind of put that on the back burner,” Helms told AP. “We’ve said we want to reach this community, and the Lord has graciously given us all these people. Now, the question (from God) is ‘What are you going to do with them?’”