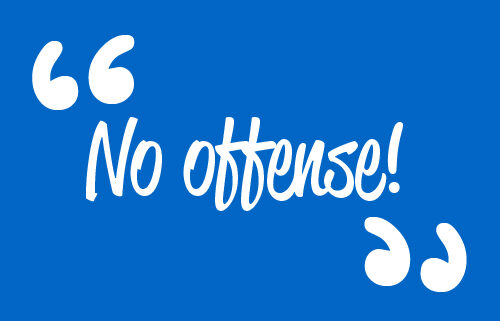 People today are so easily offended

We live in a highly sensitive, easily offended culture where it seems trendy to be offended.

In our society, being offended is seen as normal

If you’re not offended, today’s culture tells you that you should be.

Not only should you be offended, but you should let people know you’re offended.

Hashtag “speaking out,” anyone?

But the truth is, anybody can be offended.  END_OF_DOCUMENT_TOKEN_TO_BE_REPLACED

I am watching the passion that some believers have for a current “truckers demonstration” heading across Canada to the nation’s capital and picking up support and more trucks as they go. Currently they have raised millions to help support and encourage those driving the big rigs from all corners of the nation. Their demonstration is in regard to wanting the government to not mandate that all truckers get double vaccinated for Covid. They believe that it infringes on their personal rights.

I must admit that I am amazed at the passion and the momentum that is behind this current public demonstration of some people’s desire to not be told what they must do. As I have watched and listened, read and studied this current national movement I have to admit that it has been a long time since I have witnessed such passion about anything in the public sphere.

Romans 12:11 NET “Do not lag in zeal, be enthusiastic in spirit, serve the Lord.”

Other versions render it slightly different…

MSG. “Don’t burn out; keep yourselves fueled and aflame. Be alert servants of the Master, cheerfully expectant.”

NIV “Never be lazy, but work hard and serve the Lord enthusiastically.”

It strikes me that some believers are more passionate about this “truckers convoy” than they are about the things of the Lord. I am seeing, hearing, and sensing more excitement, enthusiasm, and passion regarding this convey than I have seen for Jesus in a long time. It saddens my heart. My spirit weeps for the Church where we seldom witness the kind of passion being expressed for this national demonstration.

As I study the Scriptures I see The Passion Principle in a number of places and in a variety of forms. Let me briefly share my insights…

I am hoping and praying that believers will, once again, become passionate about the things of the Lord and His Word, the Bible. Not just exhibiting passion for the current bandwagon and demonstration against something. Not jumping on the hottest and newest trend among believers on the internet. Or getting excited and passionate about a prophetic word that has not been tested or properly judged according to God’s standard – the Bible. Or the most current musical trend or worship team gaining everyone’s attention. For true believers “passion” should be reserved for the Lord and the Kingdom that He established that is currently continuing to expand and touch places that are in spiritual darkness and bondage.

I long for the day when the Church — Christians — will be known for what we are for and not just what we are against. When people will see our true passion for the Lord and the things of the Lord.

I was walking my dog the other day and stopped to chat with a neighbour who lives a few houses down the street from mine. He was shovelling snow – something a lot of us are doing a lot of this winter. We have a new city by-law that requires we shovel the snow on the city sidewalks that border our property. It has always been a suggestion and a nice courtesy to those who walk in the winter. Now it is the law and so many more people are clearing the sidewalks. Dog owners greatly appreciate the clearer sidewalks.

We were talking about one of his neighbours who apparently is not aware of the new by-law or chooses to ignore it. He immediately responded that he would be happy to clear his part as well if he had not been such a “bad neighbour” this past summer. It seems when he was cutting grass his mower spun a stone out with the grass clippings and it damaged his car. When brought to his attention he did nothing about it – not even an apology. It was obvious that my new friend had not forgiven his neighbour and would therefore not be helping to keep his portion of the city sidewalks clear.

In Matthew 18 we read about Peter who was apparently struggling with a neighbour or a family member along the same lines of needing to forgive.

Matthew 18:21-22 NET “Then Peter came to him and said, ‘Lord, how many times must I forgive my brother who sins against me? As many as seven times?’ Jesus said to him, ‘Not seven times, I tell you, but seventy-seven times!’”

Rabbinic tradition taught that a brother could be forgiven three times for the same offence, but not four times. Peter, trying to be a better than a superior Law keeper, doubled that and added one – seven times. He did not anticipate Jesus’ response, which is not a congratulations but a correction. Whether the phrase should be rendered seventy times seven or seventy-seven is irrelevant; Jesus teaches us that believers in Christ have been forgiven more than they will ever be asked to forgive. They must cultivate a spirit of forgiveness, not a habit of counting offences.

Matthew 6:14 adds a bit around the edges to this truth…

So our forgiveness is conditional upon our forgiving others and not becoming offended.

Mark, the author of another Gospel, adds his thoughts on the matter connecting the whole area of forgiveness to our personal prayer lives…

“Whenever you stand praying, if you have anything against anyone, forgive him, so that your Father in heaven will also forgive you your sins.” (Mark 11:25 NET)

Paul, the apostle, in writing to the believers in Colossae writes:

“… bearing with one another and forgiving one another, if someone happens to have a complaint against anyone else. Just as the Lord has forgiven you, so you also forgive others.” (Colossians 3:13 NET)

And, of course, the very familiar Lord’s Prayer states…

“So pray this way: Our Father in heaven, may your name be honoured, may your kingdom come, may your will be done on earth as it is in heaven. Give us today our daily bread, and forgive us our debts, as we ourselves have forgiven our debtors. And do not lead us into temptation, but deliver us from the evil one. For if you forgive others their sins, your heavenly Father will also forgive you. But if you do not forgive others, your Father will not forgive you your sins.”

That is certainly stated in no uncertain terms. Forgiveness is a very important aspect of our walk as believers. We need to deal with our issues and learn to forgive immediately and totally. Otherwise, we are simply poisoning ourselves and hindering our relation hship with Jesus and others.

Just some of my thoughts after seeing how entangled my neighbour was because of the anger and unforgiveness he was harbouring towards his next door neighbour.