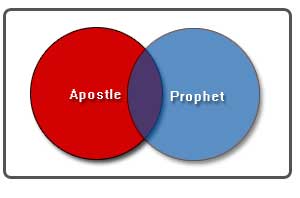 God reintroduced the office and role of the prophet in the late 1970’s and throughout the 1980’s. Then in the early 1990’s He began to reintroduce the role and function of the apostle to the church. As always, there were a few forerunners or pioneers who paved the way. They were known to function in these ministry offices long before the Church, in general, began to note and recognize the work of these five-fold ministers of the Gospel. However, in spite of these major moves of the Holy Spirit, many branches of the Church today still have yet to recognize the ministry of the apostles and prophets.

END_OF_DOCUMENT_TOKEN_TO_BE_REPLACED

I believe that the Lord is speaking to His Spirit-filled Church about focus. Our focus must be on the primary business of the Church which is to seek and to save the lost (Luke 19:10). As this was the reason that Jesus came to earth it must then be the reason the Church is still on the earth. We have many programs and activities and, I believe, that the Lord is asking us to look at all of our many activities and programs and honestly appraise them in light of the task we are called to accomplish – the Great Commission as stated very clearly in Matthew 28:18-20.

END_OF_DOCUMENT_TOKEN_TO_BE_REPLACED

I believe there is a dramatic change taking place in the Kingdom. This change is coming directly from the heart of the Father. It is being revealed to His Church in a number of ways. First, we have become aware that some of the activities we have been involved in have not been producing the fruit that we thought they would. A good example of this is Bill Hybels and Willow Creek’s admission that their programming and approach has not been producing mature, reproducing disciples of the Lord Jesus Christ. END_OF_DOCUMENT_TOKEN_TO_BE_REPLACED