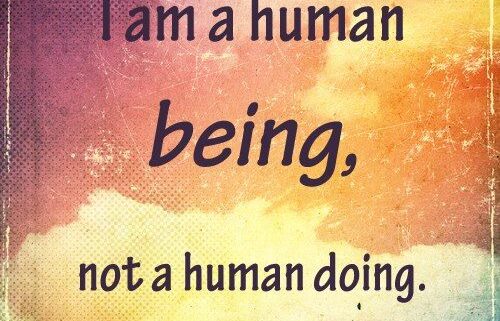 Many years ago the Lord spoke very strongly and clearly that I needed to realize that I was a human being and not a human doing. That He created me to ‘be’ first and then to ‘do’ second. That He was more interested in my character (be) than in my activities (do). And, that what I do should flow out of who I am (be).

Up until that time I was what you would call a workaholic. Someone who was task oriented. If there was a need I met it. If there was something that needed attention I was your man. I got my sense of self worth from what I did. I gained value from what I accomplished. And, in reality, I did not really know who I was because I did not spend time on the inside working through feelings and thoughts … I simply pushed them down as they were in the way of accomplishing all the stuff that needed to be done.

When the Lord spoke to me about “being” before “doing” I realized I needed to make some major changes. I needed to take personal time and make personal space to get in touch with the real me – who I was on the inside. And that was a very painful process because there was a lot of accumulated garbage in my heart and mind . You know, things like unforgiveness, resentment, anger, bitterness, judgemental attitudes, pride … the list could go on. But, you know what I mean. So I began to wade through the garbage tossing what I could and seeking help to do so when I needed help.

So, I was removing the world’s influence and a lot of the pain and clutter from experiences and past relationships… while discovering who I really was based on God’s Word and His plan for who I am. During this process character became a focus along with discovering and experiencing the Fruit of the Spirit (Galatians 5:22-23). Over the years a completely new foundation for my life was laid upon which He then began to build my ministry and what He had called me to do.

Out of this identity, knowing who I am, I can then set out a direction for my life with greater wisdom and insight than before I discovered this truth. I can look at the coming new year and determine where the Lord wants me to go and what He wants me to be involved in. And, none of that effects my identity as they are in the “do” category and not a “be” issue. As a result change is much easier; criticism is not personally destructive, I am not devastated when people don’t like me or reject my ministry … I am secure in who I am. And open to whatever the Lord wants me to do. And, because of this transparency I continue to see growth in the area of my character, gifts, calling, skills, and talents.

So, before you set your goals for 2021 it might be a good idea to review who you really are separated from what you do for a living. Who are you “in Christ.” Then begin to set some goals that enable you to be the best you that you can be. Leave the “do” for later… first things first. Major on the major issue and not on the minor issues.

That will, of course, bring great honour and tremendous pleasure to God, your heavenly Father.

Reaching into 2021
Scroll to top