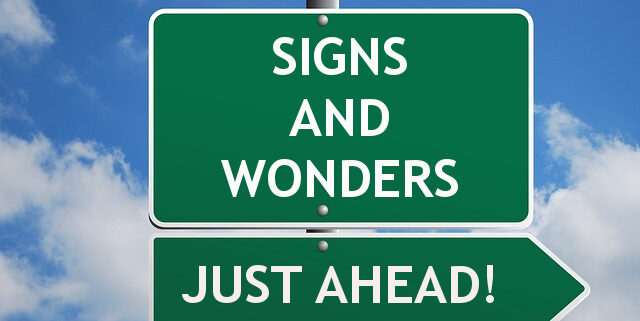 The truth and dynamics of the New Testament Church are being restored, including the working of miracles and sign and wonders. A miracle is a supernatural event that breaks into the natural. It is the spiritual breaking into the natural or the material world.

One Greek word translated miracle is dunamis. This word is used 113 times in the New Testament. It means inherent power or the power residing in a thing by virtue of its nature. It refers to God’s energy, power, ability, influence, wealth, or might. It is translated power(s) 77 times; mighty or mightily, 13 times; miracle(s), 8 times; strength, 7 times; virtue, 3 times; ability, 1 time; and abundance, 1 time.

The New Testament Church carried on its mission in the power of the Holy Spirit. This pattern will continue until the second coming of Christ, according to the Bible. Spiritual power will increase greatly before the Lord’s second advent. The Church will move in great power, and so will the domaine of darkness. Therefore, believers will need to distinguish God’s miracles from other miracles. People attracted to spiritual power just for the sake of power open themselves to delusion or deception.

Revelation 11:6 “They have the power to shut the sky, that no rain may fall during the days of their prophesying, and they have power over the waters to turn them into blood and to strike the earth with every kind of plague, as often as they desire.”

2 Thessalonians 2:9 “The coming of the lawless one is by the activity of Satan with all power and false signs and wonders…”

Another important word pertaining to miracles is the Greek word semeion. It refers to a distinguishing mark by which something is known or a visual sign by which something is recognized. It is used 61 times in the New Testament. It is translated as sign(s) 34 times; miracle(s), 22 times; wonder(s) 3 times; token, 1 time; and tare, 1 time.

John uses semeion in his Gospel to refer to miracles that are signs of Christ or that reveal something about Christ’s nature. For John, miracles always pointed to something about Jesus as King or about His Kingdom.

John 6:14 “When the people saw the sign that he (Jesus) had done, they said, “This is indeed the Prophet who is to come into the world!”

John 12:18 “The reason why the crowd went to meet him was that they heard he Jesus) had done this sign.”

Signs never are an end in themselves. They are signposts, prophetic markers, or supernatural revelations of something beyond themselves. In the New Testament they were signs that the Kingdom of God has come, For example:

People who sought miraculous signs as an end in themselves were condemned by the Lord. They sought miracles for self-centered reasons or for personal blessing. Bored religious people even sought signs for entertainment.

A third Greek word referring to the miraculous is Ergon. It refers to a deed, action, or accomplishment. It describes something brought into being by work. It is used 177 times in the New Testament and his usually translated work(s) or deed(s). This word clearly shows that the work of God includes miracles.

John 5:20 “For the Father loves the Son and shows him all that he himself is doing. And greater works than these will he show him, so that you may marvel.”

John 9:3-4  “Jesus answered, ‘It was not that this man sinned, or his parents, but that the works of God might be displayed in him. We must work the works of him who sent me while it is day; night is coming, when no one can work.’”

The work and words of God are related. Every work has within it a word. Every miracle has a message. Miracles encourage people to believe the message.

Jesus promised that the pattern of ministering the work and words of God would increase in the Church.

John 14:12 “Truly, truly, I say to you, whoever believes in me will also do the works that I do; and greater works than these will he do, because I am going to the Father.”