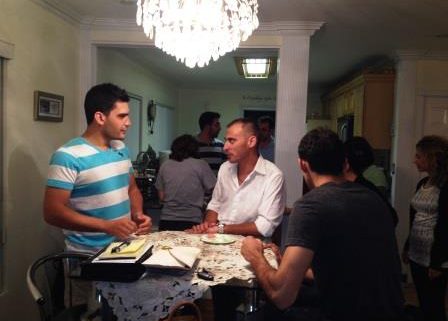 Are we ready to “go into all our world and make disciples?” Pictured here are four of about 20 young people who descended on the pastor’s house one night in the city of Glendale, California. They had come to ask questions and to fellowship; to pray and to receive prophetic words. They were hungry, they were curious, they were expectant and excited. God met them and ministered powerfully to them. He always does when someone comes into His presence expectant and with an open heart.

Around the globe God is moving in the hearts of people to move them into His purpose for the Kingdom. He is not just speaking to them about His plan for their lives – He is inviting them to be a part of the ever-expanding Kingdom of God and to be actively engaged in that expansion. He is asking people, and not just young people, to become committed to His Church as He builds it and releases it to impact the nations with the Gospel. There is a sense of urgency in what He is doing; a sense of something big is happening and we are invited.

In reality, God is in “party mode.” He states in His Word that the whole of heaven rejoices and parties over one lost sinner saved. So, it is as if Heaven is inviting us to play a major role in releasing the party by being committed to the Church that Jesus is building and the role He calls the Church to have in reaching every nation and people group on our planet.

These young people from Iran and Armenia whom I met in California are moving forward with God. They now live in the United States so that they can have freedom to meet together and worship; evangelize and disciple… But they are are still praying for those in their home land and are even willing to go back and risk their lives should God ask them to so that their fellow Iranians and Armenians can hear the good news of the Gospel.

Are we ready to “go into all our world and make disciples?”