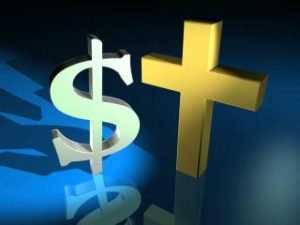 People are tired of churches that keep score with money. My brother, when he was alive, use to go occasionally to his wife’s church – a church that printed all the members’ names in the bulletin at the end of the year with everything they had given over the last twelve months. The pressure on those people must have been off the charts.

Christians are called to be generous, but the church is never called to manipulate or guilt people into generosity. Some Christian (I use that word lightly) radio programs, on a station in a neighbouring city to where I live, spend more time asking for donations than they do preaching Jesus.

A listener wrote to him:

He is still waiting.

People are tired of the church’s constant talk and emphasis on money. Yes, we need funds to operate. But, what are we doing with the funds we are blessed with? How are we using these funds to impact the community that we are called to serve? And, maybe, just maybe, money is not the real issue. Maybe there is a deeper issue to be examined here.

Recently in a church that I work closely with one of the leaders had one of those “God moments.” We were talking in an elders’ meeting about the financial situation of the church and he pushed his chair back and said, “We don’t have a money problem, we have a leadership problem.” And he was right. Money is really never the issue. If there is a money problem then the root is somewhere else – leadership, vision, a disconnect from the real world (see yesterday’s blog)… it is always connected to something else.

Paul, the apostle, realized this and uncovered this truth when he wrote, “They exceeded our expectations: They gave themselves first of all to the Lord, and then by the will of God also to us” (2 Corinthians 8:5). They gave of themselves first to the Lord, then to others. Their spiritual commitment let to compassion. And, compassion led to giving to Paul and his cause of the moment.

The same is true today … we don’t have a money problem, we have an issue of being committed to the mandate of the Church – seeking and saving the lost.

When that becomes the burden of the hearts of those who say they are disciples of Christ then money will no longer be an issue and offerings will no longer play a major role in the Church. If we are following Jesus and becoming fishers of men then our money will be where our heart is – and if we are not fishing then maybe we are not following … and that is why money is such an issue and appeals for money turn us off.