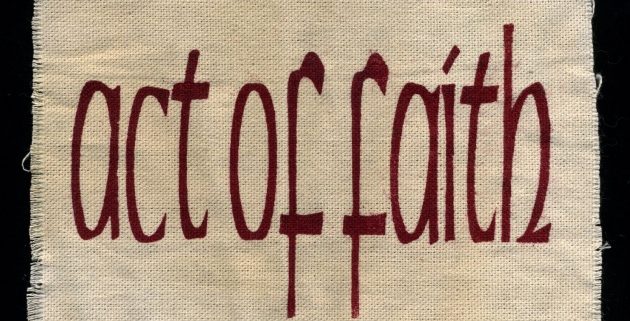 Here is a truth to remember: You can’t play it safe and act in faith at the same time.

At a meeting of church leaders in the late 1700’s, a newly ordained minister stood to argue for the value of overseas missions. He was abruptly interrupted by an older minister who said, “Young man, sit down! You are an enthusiast. When God pleases to convert the heathen, he’ll do it without consulting you or me.”

The reason that attitude is inconceivable today is largely due to the subsequent efforts of that young man, William Carey. Carey worked in various jobs to support his family while he continued to educate himself, even teaching himself New Testament Greek. In 1792 he organized a missionary society, and at the first gathering he preached a sermon with the call: ”Expect great things from God; attempt great things for God.” Within a year, Carey, his family, and some like-minded daring people were on a ship headed for India.

In many ways, Carey was a catalyst for change, helping to inspire a big-thinking, risk-taking, faith-filled approach to modern missions. He served the rest of his life in India at a time where there was no modern travel or communication systems. He was a minister, a translator, social reformer and cultural anthropologist who founded the Serampore College and the Serampore University, the first degree-awarding university in India. Carey even translated the Bible into Bengali, Oriya, Marathi, Hindi, Assamese, and Sanskrit. He also translated parts of it into twenty-nine other languages and dialects. He helped educate horticulturists, which raised the quality and productivity of the nation’s agricultural industry. His life was a living, breathing example that big things happen when we expect great things from God and attempt great things for God.

Our tendency is to make decisions that we are comfortable with, to play it safe and do only what we feel is rational. But God has called us to acts of faith. We’re not meant to spend our lives as mere observes and spectators who hang out in the bleachers and offer commentary as world everts play out in front of us. We’re here to engage potential, explore possibilities, and act in faith.

Scripture tells us, “we do not belong to those who shrink back and are destroyed, but to those who have faith and are saved” (Hebrews 10:39). If you’re a Jesus follower, this applies to everything God has for you. When you have challenges, setbacks, even failures and mess-ups, you are not meant to be like those who shrink back. No, you are meant to take on the challenge and push through resistance that tries to contain you.

God has something for you to do for Him and needs you to keep walking by faith. Remind yourself that big things happen when you act in faith. Keep going big. Keep believing in what you don’t see. Pray bold prayers. Your life story will be dramatically different with acts of faith. Doors will open that would otherwise stay closed. Relationships with like-minded people and God-assigned connections will happen that would have otherwise never happened. When you live out of faith and not in fear, you will accomplish more, experience greater fulfillment, and leave a lasting legacy.

Rather than seeing a need, you may start to see the opportunity. Rather than just thinking, Why doesn’t someone do something?, You may find yourself saying, I’m going to do something.

There Is Only One You!
Scroll to top