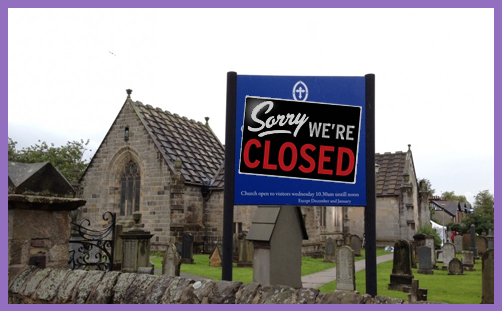 During my last apostolic trip into the United States to minister I was involved in the final transition of a local congregation. This church which had been ministering for the Lord for over 50 years in the valley in which it was located had come to an end of its life and needed to be closed.

Often a church that starts with a tremendous move of the Spirit and a flow of life – God’s life – touching and transforming lives finds itself in a situation where that ‘life-flow’ is no longer there. Oh, there are always numerous reasons for the decline but regardless it reaches a point where the congregation, the local assembly of believers, simply need to recognize that this ‘life / zoe’ is simply no longer there and we are going through the motions of a weekly worship service without seeing lives changed or new people born again and saved. Often that realization comes along with the practical issue of the congregation no longer being financially viable.

In this case we – the three apostles who oversaw the work – knew that the time had come. And, we knew we were responsible to move into this “death stage” with grace and love. So we began negotiating with another church in the same area that has been doing a fantastic job of reaching the lost and especially touching the lives of the young people.

With the help of the Holy Spirit we came to an agreement to pass the ownership of the building (fully paid for) and parking lot and adjoining park as well as all the contents of the building (substantial) to this other active and alive assembly. We gifted it to them.

We initiated the conversation and they responded. And the move we made and finalized a few days ago was confirmed by several visions (dreams) received several years ago and then further confirmed by several prophetic words from prophets in two different states who called after-the-fact and let us know that what we had accomplished was God’s will. God had showed them that a major change was going without them having any idea what was happening or when it took place.

So, we scattered the remaining sheep, releasing them to attend other churches as the Lord leads them. Never easy because we all love and care for one another. Of course, we can continue to fellowship with each other no matter what local church family each one ends up becoming a part of. And, we recognized the work of those who came before us who in many ways sacrificed so that the Gospel of the Kingdom was faithfully preached and people were reached.

And, the new owners of the building will continue the ministry to the valley as they open a new chapter in the life of a building that people call a “church.”

I understand that this has not been easy on those involved. But, it is the right move. To be blunt, “If the horse is dead, dismount.” And so we did.

But the Church of Jesus Christ has not suffered defeat. She continues on with new direction, new understanding, and a renewed vision, and new leadership to further reach to the ends of the earth with the good news of the gospel.

The other thing I heard as I was leaving the building and getting into my car was “Well, done good and faithful servants.” The Lord is pleased with the faithfulness of those who were part of this amazing family to which we bid goodbye.

Careful of “One Verse” Teachings
Scroll to top