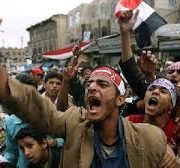 The season we are in has been called the “Arab Spring” as new life springs forth in many Arab nations such as Egypt, Kuwait, Syria and Yemen. The youth of these nations are refusing to remain under the hand of dictators and a way of life that is not letting them enjoy a decent standard of life. They have had enough and are now, in many cases, risking their very lives for what they believe. END_OF_DOCUMENT_TOKEN_TO_BE_REPLACED

The Christian has a different definition of insanity or, dare we call it, stupidity. Our actions show that we believe if something is not working then all you need to do is double our efforts and then it will work. You are praying and nothing is happening – so you double your efforts and pray twice as hard. It seems to me if what your praying is not bringing the results you desire, need, or believe God wants – then doubling it will not change that. Two times nothing is still nothing. Maybe you need to change what you are praying for or how you are praying. Maybe you need to see if there is sin in your life and, if there is, repent and seek forgiveness.

You are witnessing and no one is coming to the Lord and being born again – so you spend twice as much time out witnessing then you were. Again, two times nothing is still nothing. Maybe you need to look at the way you are presenting the Gospel. Maybe the time of the day you are on the streets or in the coffee shops needs adjusting. Maybe you are fishing using the wrong bait. Don’t just double your efforts and work harder – look at what you are doing and how you are doing and make changes – work smarter.

We have entered the summer season when normally our pace of life slows a bit, we have some time away from regular routines and even a brief holiday when we get away from our normal surroundings. This would be a good time to look at all of the various aspects of your life as a believer and begin to plan some changes for the fall when things begin, once again, to move ahead at full steam.

Look to the foundational issues such as prayer, Bible reading and studying (yes, we are called to actually study the Bible), witnessing, involvement in and belonging to a local assembly or church, fasting tithing, your keeping of a sabbath, the Christian disciplines of silence, stillness, solitude and your fellowship with the Holy Spirit. Before building any more of your life on the sand (always doing what you have always done) try examining the foundation upon which you are building.

You will be glad that you did.

I happen to like to have things planned out. I am not one of those people who manages to be spontaneous. In fact, my standard line is, “I can be spontaneous as long as it is next Tuesday at 2:00p.” I simply like to map out my day, week and month ahead of time. This is not always possible when walking with the Lord. The Lord tends to be spontaneous and seems to like the word “suddenly.”

So I have learned that I need to loosen my grip on control. John 3:8 states, “The wind blows wherever it pleases. You hear its sound, but you cannot tell where it comes from or where it is going. So it is with everyone born of the Spirit.” In other words, as followers of Jesus we should start expecting the unexpected. It is easy to confuse what we have planned for what’s really important. The meeting you are in might seem like top priority, but the unanticipated phone call from your son, daughter, friend, or neighbor might be much more momentous in the long run for both of you.

Isn’t it interesting that many of Jesus’ most memorable actions were done in response to intrusions into His own plans and schedule? His powerful words to Nicodemus came after Nicodemus showed up one night – unannounced an uninvited – to ask a few theological questions. As a result, Jesus was able to seize the opportunity to teach this respected religious leader what it means to experience a genuine spiritual birth and the forgiveness and life that come with it.

Later in John 9 we see Jesus walking along the road on His way to do something important when He sees a blind man begging by the side of the path. Rather than viewing him as a distraction Jesus recognizes a chance to express divine love and compassion. So He stops and heals the man, changing the man’s life forever.

John Wesley, former Anglican priest, who was part of the revival in England that had such transforming effects upon society that England was spared from suffering a revolution such as France when through when many literally lost their heads. He is also the founder of the group now known as the Methodists due to his methods of discipling new believers. He is quoted as having said, “The world is our parish.”

How true that is today. With the internet avalable to us; instant messenger; Skype messenger, phone calls and video calls; Blackberry Messenger worldwide for free to another Blackberry; long-distant packages allowing unlimited calling; unlimited text messaging and so many other ways to communicate and connect. Think of some of the phenominal things that happen daily…

In the on-line edition (sent by email) of the New York Times there is more information than the average person in John Wesley’s time would likely encounter in a lifetime.

On average 7.3 million new pages of information are being added to the visible World Wide Web today – and more will be added tomorrow.

In the next several hours 1,000 books will be published.

The total of all printed knowledge will double in the next five years.

On average ther are well over 6 billion instant messages sent each day.

Our world will make available more information in the next decade than has been discovered in all of human history.

And, in the midst of all of this there is a “holy nation” within the nations working to make their voice heard so as to tell others about Jesus. The whole world is open to us and available through the amazing modern technology that is now sitting inside your laptop or iPad.

I chat daily with people in South Africa, Russia, United States of America, Canada, Ukraine, Kazakhstan, Belarus, Turkey, England, Finland and a growing list of other nations. In many cases I am sharing the Gospel with non-believers; in others I am discipling new believers. For some I am training and equipping; still others are being mentored. Gee! Sounds like what should be happening in a parish or local church. John Wesley was right, “The world is our parish” and so much easier to connect with then ever before in the history of humankind.

And who are you connecting with? Whose life are you impacting with the Gospel and the power of God? Remember, we are called to “go into all the world and make disciples…” and a lot of that can be done from the comfort of your home. Not all but a lot.

I just recently finished a book – the story of a Christian photographer who, while on assignment, was lost for ten days in the Amazon rain forest and his journey of faith as He discovered God’s faithfulness. In the true story their guide on this trip deep into the Amazon rainforest – his name is Aschuco – would wear a red t-shirt every day regardless of how dirty it was becoming because then they could see him a few feet ahead of them. The jungle was so dense and thick that everything was simply shades of green and the red t-shirt stuck out against the constant and total green they faced every day.

Then I read an outreach story where teens in a local church (Salem Alliance Church in Salem, Oregon) printed up t-shirts that said “Give a Shirt” which is an intentional playing with words to make a point. One of the youth had discovered that in her local school district there were 900 homeless students and decided to do something about it. The youth of her church had t-shirts printed with the words “Give a Shirt” on the front and, on the back, the words, “Give Hope – Restore Dignity.” They sold the t-shirts for $15.00 and $10.00 of that went into a fund to help the homeless teens.

The youth went even further – every three months they would run something for the homeless students – free vision check-ups, a clothing giveaway with new clothes and shoes that local businesses donated. They also provide money for homeless students to go to stores like Old Navy which then provides hundreds of dollars in discounts and additional help to the students who come into the store to purchase new clothes. This way the street kids were able to wear what other students their age were wearing and not unwanted hand-me-downs and stuff you would not want to be given.

The youth from the church also built relationships with the homeless students and often shared a meal with them. For some of the homeless students this would be their one decent meal in the week. As one of the Church youth stated, “They may not believe what we believe, but they agree that’s what they should see out of Christians in culture.”